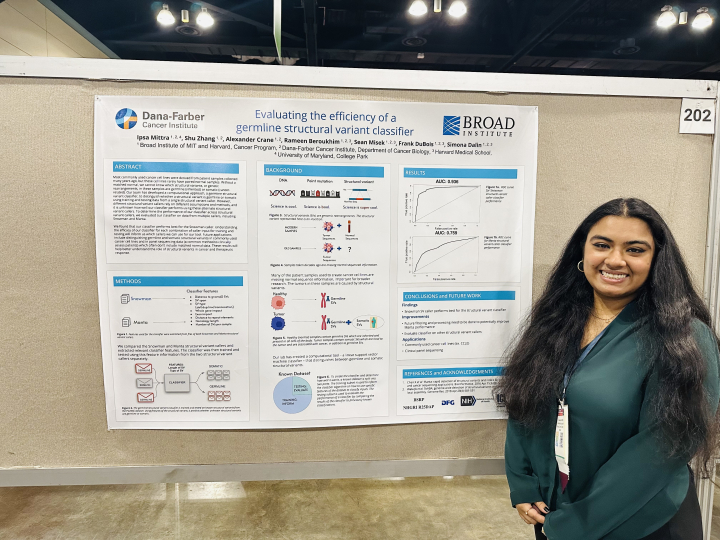 Growing up with professors for parents, junior and computer science major Ipsa Mittra was immersed in academia from the get-go. She knew from a young age that she wanted to conduct research to make a difference.

In high school, Mittra found her niche in computational biology through the STEM magnet program at Montgomery Blair High School in Silver Spring, Md. This spark of interest eventually led her to a prestigious summer fellowship this year conducting research at the Broad Institute and presenting at the 2022 National Diversity in STEM Conference.

“SACNAS was my first time presenting my research at a conference, and it was such a great experience,” Mittra said. “I got to meet so many other students like me conducting a range of interesting research, and it really solidified my plans to apply for graduate school as my next step.”

Mittra wasn’t the only Science Terp who presented at the Society for the Advancement of Chicanos/Hispanics and Native Americans in Science (SACNAS) National Diversity in STEM Conference in October. Physics graduate student Edgar Perez also presented his research in an oral presentation titled, “A Practical Source of Coherent Light from a High-Performance On-Chip Microresonator Optical Parametric Oscillator,” and postdoctoral astrophysicist Laura Vega gave an oral presentation on her research, “Simultaneous Multiwavelength Observations of the Highly Active M Dwarf YZ CMi.”

Presenting her research at SACNAS offered Mittra the opportunity to convey her Broad research to her peers, as well as faculty members from graduate programs she is interested in.

“I loved meeting other students at SACNAS who were presenting research that makes a difference,” Mittra said. “I also felt so special having graduate school faculty coming up to talk to me about my research; it was nice to see the applicability of the work and how other people that I look up to realize the stuff I’ve done is pretty cool.”

“I did a summer research project in high school that was in the computational biology area, and that made me realize this is what I wanted to do in the future. That’s why I’ve been following that path,” Mittra said.

Mittra worked in Rameen Beroukhim’s lab at Broad, where she applied machine learning to examine structural variants of cancer mutations. To determine whether variants were germline (inherited) or somatic (developed in the body after conception), Beroukhim’s lab developed a computational approach.

The lab is using decades-old cancer sequence data sets—but because they were collected so long ago, they do not indicate what kind of mutation the cancer was (germline or somatic). To use these data sets to their full capacity, it’s important to identify whether the mutation was inherited or developed over time.

“Think of this classifier as the filter that sorts through what is a spam email and what belongs in your inbox. When you create an email account at first, you tell your email what is spam based on features like sender and message information,” Mittra said. “Eventually, the classifier picks up on the pattern itself and can make its own choices.”

Similarly, the classifier Mittra worked on examines data that has been pre-labeled as germline or somatic and identifies features that are important about structural variants so that that knowledge can be applied to classify unlabeled sequences. Understanding the roles of structural variants in cancer will help researchers develop more effective and tailored therapeutic responses for patients.

“During my summer fellowship, I got to go to the Dana-Farber Cancer Institute once a week to see the cancer patients being treated,” Mittra said. “It was a really big inspiration knowing the work I was doing had a direct application to someone that could potentially be getting treated for cancer.”

Attending SACNAS gave Mittra the opportunity to be in a research-based environment surrounded by other people who are pursuing a career in academia—just like she is.

Soon, Mittra will apply to graduate programs specializing in computational biology. Meeting with graduate students and faculty members at SACNAS gave her clarity about the type of grad school community she wants to join and how she can contribute to making the academic community more inclusive once she becomes a professor.

“If you have a position of privilege as a researcher, you can empower other people by giving them those opportunities in research,” Mittra said. “You’re doing something small in one lab, but the work you’re doing could be crucial for the lab’s downstream to help cure an illness—and that’s so inspiring to me.”

—Story by Katie Bemb of the College of Computer, Mathematical, and Natural Sciences