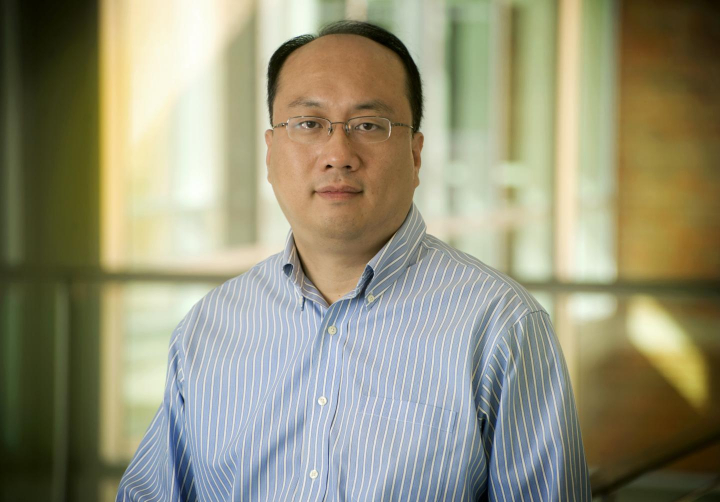 Huang, who will join the University of Maryland as the inaugural Brendan Iribe Endowed Professor in Computer Science in spring 2023, was the first researcher to propose theoretically guaranteed algorithms for breaking backward locking in backpropagation, which play a central role in optimizing deep learning models. He also pioneered research on asynchronous distributed learning, federated learning and multimodal imaging-omics data integration.

His research touches on many aspects of computer science—including machine learning, data mining, biomedical data science, computational neuroscience and smart health care—and he hopes to take his work to the next level at UMD.

“UMD has one of the best computer science programs nationally—and internationally—so I’m happy to be here,” said Huang,  who will also hold a joint appointment in the University of Maryland Institute for Advanced Computer Studies. “UMD has outstanding scientists, and I hope to find more interdisciplinary collaborations in important research areas.”

Huang spent the last five years as the John A. Jurenko Endowed Professor in Computer Engineering at the University of Pittsburgh. Prior to this role, he was a Distinguished University Professor in Computer Science at the University of Texas at Arlington from 2007 to 2017. Huang holds a Ph.D. in computer science from Dartmouth College and was named Fellow of the American Institute for Medical and Biological Engineering in 2019.

He currently leads seven artificial intelligence (AI) and computational health projects funded by the National Science Foundation (NSF) and another three funded by the National Institutes of Health. He has also contributed nearly 300 articles to top-tier computer science conferences and published 100 papers in peer-reviewed journals.

UMD Computer Science Chair Matthias Zwicker notes that Huang is a valuable addition to the department, which has a long history of AI research.

“We are absolutely thrilled to welcome Dr. Huang to our department. His extraordinary leadership and accomplishments both in theoretical and application-oriented aspects of AI research will further strengthen our department in strategically important areas,” said Zwicker, who holds the Elizabeth Iribe Chair for Innovation and the Phillip H. and Catherine C. Horvitz Professorship. “We are deeply grateful to all stakeholders and supporters who made it possible to establish the Brendan Iribe Endowed Professorship that Dr. Huang will hold, which will help further elevate our stature as a leading force in AI research.”

Huang first took an interest in AI while studying at Shanghai Jiao Tong University in Shanghai, China, where he earned both a bachelor’s degree in 1997 and a master’s degree in 2001 in automation. At the time, AI was just starting to capture the public’s imagination, with one famous example being the 1997 chess match between IBM computer “Deep Blue” and grand master Garry Kasparov that left Kasparov defeated. Beyond entertainment, AI and machine learning were starting to show promise as tools that could improve the field of medicine.

Though Huang’s initial interest was in robotics, he recognized the benefits that AI—and computer science—could bring to people’s lives.

“Both the fundamental research and the application are treated equally important in computer science, so we can apply it to real-world applications,” Huang said. “I found it fascinating, so I shifted a little bit from robotics to AI.”

One quickly growing area that Huang explores in his research is AIoT, or Artificial Intelligence of Things. By injecting AI into Internet of Things (IoT) applications, computer scientists can build and incorporate sophisticated platforms into everyday devices, such as cell phones, to improve people’s lives. This has a variety of applications, including health monitoring, smart offices, autonomous driving and more.

As the principal investigator on a team of researchers from three universities, Huang recently secured a $5 million NSF grant to build a new nonseparable framework of hardware, software and algorithms to enable extreme large-scale machine learning systems on AIoT and Internet of Senses.

He is also the co-principal investigator of an NSF-funded project that aims to create a non-invasive, at-home test for COVID-19 using a cell phone. The test would use AI techniques and acoustic sensing (via the phone’s speaker and microphone, as well as an add-on mouthpiece) to measure changes in a user’s airway mechanics that are correlated with infection.

Additionally, Huang has been leading projects that aim to improve the early diagnosis and treatment of complex brain disorders such as Alzheimer’s disease and related dementias. He co-leads the Artificial Intelligence For Alzheimer’s Disease (AI4AD) research consortium, a National Institutes of Health-funded project to develop ultra-scale AI techniques to identify the genetic biomarkers associated with Alzheimer’s disease and to better recognize and detect the warning signs of this debilitating brain disorder.

For Huang, the motivation to keep cranking out papers and pioneering new research stems from a desire to make a difference. The work he does has the potential to improve public health and ultimately save lives.

“If we can design new machine models to predict an early diagnosis for Alzheimer's disease or cardiovascular disease or cancer, or use them to design new drugs, our research could benefit millions or even billions of people,” Huang said. “That’s one thing I really like to see in my work—benefits to society and people.”