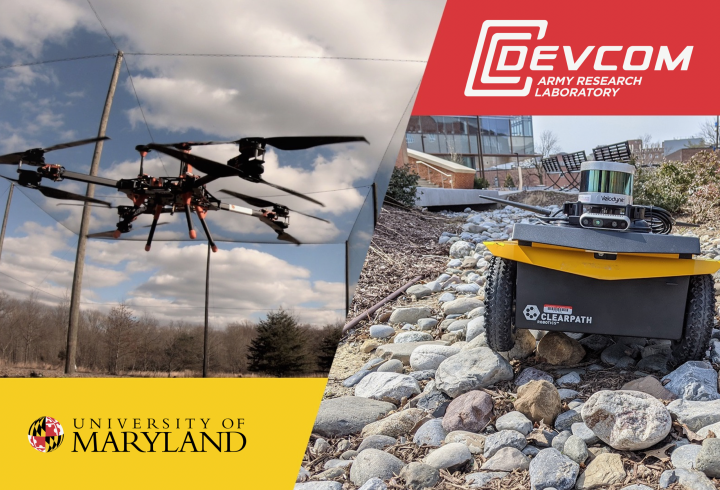 Faculty and research scientists at the University of Maryland recently received funding to continue their work in artificial intelligence and autonomous technologies that can benefit the U.S. military.

The award—expected to reach up to $15.1M—is the third-year installment in a five-year cooperative agreement between the U.S. Army Research Laboratory (ARL) and multiple academic institutions. If fully funded through the entire five-year period, the award could total almost $68M.

Known as ArtIAMIS, which stands for AI and Autonomy for Multi-Agent Systems, the agreement incentivizes research and innovation focused on robotics, systems, and smart devices that work intelligently in cooperation with each other and human actors across multiple domains.

Researchers in the Department of Computer Science and the University of Maryland Institute for Advanced Computer Studies (UMIACS) are active in the project, with ongoing work that spans engineering, robotics, computer science, operations research, modeling and simulation, and cybersecurity.

“Generating new ideas and technologies in AI and autonomy will require diverse skill sets, unique collaborations, and a robust testing infrastructure to prototype these technologies,” says Dinesh Manocha, a Distinguished Professor of computer science who is a co-PI on the project. “We’re fortunate to have access to all these tools, as well as dozens of talented graduate students from different departments on our campus who will significantly add to these efforts.”

Manocha, who has joint appointments in electrical and computer engineering and UMIACS, is leading the ArtIAMIS efforts to develop ground and aerial autonomy related to human-machine teaming.

His research group has developed several new technologies and integrated them with the ARL Autonomy Stack, which is a program to develop a prototype “brain” for unmanned vehicles. Working side-by-side with ARL researchers, the UMD team was able to assess their ideas at a government test site just north of Baltimore.

Other topics being explored by UMD researchers and ARL scientists include AI and machine learning for situational awareness; individual and collective behavioral and physiological health assessments; explainable AI for the battlefield use; perception-based interactions; forensics for human-machine teaming; metareasoning to improve team performance; and human-machine teaming and effective aggregation of information in complex systems.

Early results of this collaborative work has resulted in numerous papers accepted at major conferences. This includes “FAR: Fourier Aerial Video Recognition,” which describes an innovative object disentanglement method to innately separate out the human agent from the background imagery. Another paper, “Dealing With Sparse Rewards in Continuous Control Robotics via Heavy-Tailed Policies,” examines novel ways to address the challenges of using AI in continuous robotic control tasks like manipulation and navigation.

In addition to their participation in ArtIAMIS, Manocha, Lin, Tokekar, and Feizi are core faculty members in the University of Maryland Center for Machine Learning.