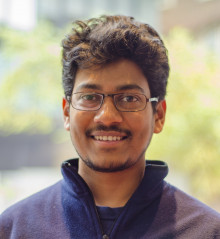 Pratap Tokekar is an Assistant Professor in the Department of Computer Science and UMIACS at the University of Maryland. Between 2015 and 2019, he was an Assistant Professor at the Department of Electrical and Computer Engineering at Virginia Tech. Previously, he was a Postdoctoral Researcher at the GRASP lab of University of Pennsylvania. He obtained his Ph.D. in Computer Science from the University of Minnesota in 2014 and Bachelor of Technology degree in Electronics and Telecommunication from College of Engineering Pune, India in 2008. He is a recipient of the NSF CAREER award (2020) and CISE Research Initiation Initiative award (2016). He serves as an Associate Editor for the IEEE Robotics & Automation Letters, IEEE Transactions of Automation Science & Engineering, and the ICRA and IROS Conference Editorial Board.