Champion for Women and Underrepresented Students in Computing Retires from UMD 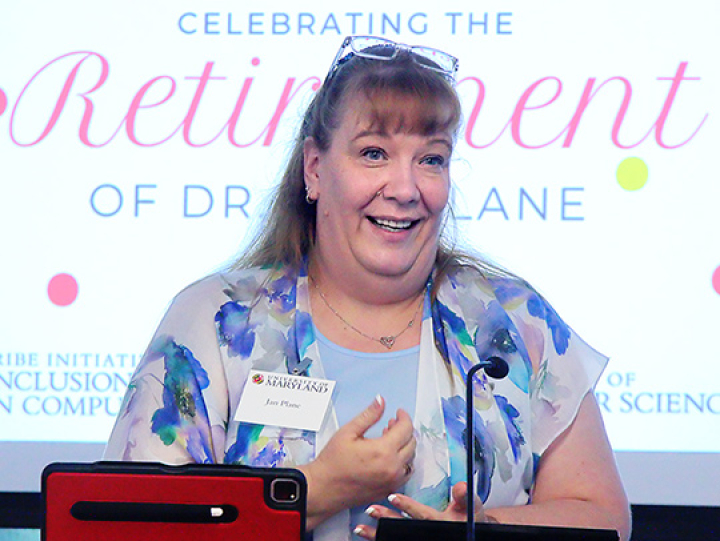 In the late 1990s, Rwanda was in a state of rebuilding and healing after civil war and genocide devastated the country. Among other economic revitalization initiatives, the University of Rwanda received 20 Unix-based computers through a USAID grant. But the university couldn’t find anyone who knew how to use them.

That’s when Kelly Wong, the grant’s principal investigator, reached out to his colleague Jan Plane, who was an instructor in the University of Maryland’s Department of Computer Science at the time. Little did he know then the enormous impact that Plane, who retired from UMD this May, would have on computer science education—from this project in Rwanda to UMD and beyond.

“They found me because I was teaching Unix for the Computer Science Department,” Plane said. “Kelly Wong, who was running the USAID computer lab grant, told me, ‘Even if you just go for this January term, you could make more of a difference there than during your whole time at UMD.’”

Having grown up in a small Midwest town in northern Wisconsin, Plane didn’t even have a passport at the time. But once she decided to join the project, she quickly remedied that and took her first plane trip to Rwanda a few months later in January 2000. This was the beginning of what turned out to be an extended commitment to teaching computer science courses both in person and remotely.

“I ended up being on that project in Rwanda for almost six years,” Plane said. “Going back and forth to Rwanda, building a computer science department there—it was amazing.”

In 2005, Plane joined another project in sub-Saharan Africa building a computer science master’s program by linking up resources between six universities in the region. Then, in 2006, Plane’s work in Africa prompted Washington State University to recruit her for a project in Afghanistan—helping Kabul University build up its computing degree program. For Plane, this project presented a whole new set of challenges.

“Working on the project in Kabul for five years was different than my previous projects in Africa because I was teaching the professors, not the students,” Plane said. “Making sure these professors could get master’s degrees and continue working actually inspired my doctoral research on women in computer science in Afghanistan, because I was working on my Ph.D. in the College of Education at the time.”

It was during her time working on the project at Kabul University that Plane learned a Dari proverb that would become her guiding philosophy in program-building moving forward—Qatra qatra darya maisha. Drop by drop a river is formed.

“The only way to have big impact is to put your drop in. The more drops you put in, the more drops other people put in and then a river flows,” Plane said. “It might sound small at first, but I feel the biggest legacy is the impact on individual students. After all these years, the river does seem to be flowing and continuing to pick up momentum.”

“The research at that time really showed that middle school is when we were losing women in the more mathematical STEM fields. The one-day workshops that a lot of people were doing to get people exposed to computing weren’t shown to have a long-term impact,” Plane said. “Based on those two factors, I proposed the idea for CompSciConnect—a three-year summer camp for middle schoolers that continues to build in rigor.”

That first year in 2012, Plane received hundreds of applications for the CompSciConnect summer camp and hosted about 40 middle-schoolers. One of them, Utsa Santhosh, graduated this May from UMD with her B.S. in computer science.

“Dr. Jan has really been one of the great constants in my life,” Santhosh said at Plane’s retirement celebration on May 19. “From being in CompSciConnect as a middle school student to being a teaching assistant for summer camps as a high school student to being an undergrad here in CS the past four years—Dr. Jan has supported me and believed in me every step of the way. I know I would not be here without her.”

After that successful first year of CompSciConnect and plenty of lessons learned, Plane continued to run the camp, along with other programs and organizations to support women in computing at UMD. Eventually, it became clear to her that all of these programs focused on building a community to support women in computing needed a home—so with support from the department, the University of Maryland Institute for Advanced Computer Studies, and the College of Computer, Mathematical, and Natural Sciences (CMNS), Plane launched the Maryland Center for Women in Computing (MCWIC) in 2014.

For MCWIC’s official launch event, Plane organized a showcase of CompSciConnect student projects. There she met Brendan Iribe, a UMD alum who co-founded several successful technology startups including the virtual reality company Oculus with friends he met at UMD.

“Brendan was speaking at the MCWIC launch, and he was so impressed with the CompSciConnect students,” Plane said. “When I told him we were turning away twice as many students from the camp than we were accepting, he asked me very simply, ‘What would it take to double it?’”

Plane calls Iribe a “true believer” in the mission of MCWIC. After his $500,000 donation to double the size of CompSciConnect in 2017, Iribe stayed connected with MCWIC. He later donated $1 million more to launch the Iribe Initiative for Inclusion and Diversity in Computing (I4C) in 2019 to further diversify the tech sector and make all areas of computing inclusive.

Now, I4C runs more than 13 summer camp sessions, serving 300 students from elementary school to beginning college students. In addition to their extensive K-12 efforts, both MCWIC and I4C provide a variety of learning, leadership and community-building experiences for undergraduate students in computing majors at UMD. Since MCWIC’s launch in 2014, the percentage of women majoring in computer science at UMD has jumped from 15% to 21%. The department now has almost 800 women pursuing computer science degrees.

“Thanks to Jan’s efforts, we can say that our Computer Science Department at UMD is a leader in advancing equity in computer science,” said Matthias Zwicker, computer science department chair who also holds the Elizabeth Iribe Chair for Innovation in the Department of Computer Science and the Phillip H. and Catherine C. Horvitz Professorship in Computer Science. “Her relentless efforts to uplift women and underrepresented students in computing at our university are truly unparalleled. I have no doubt the team she has organized in I4C will continue her great work.”

“After the CS Matters in Maryland Grant, we started on the path to proposing the Maryland Center for Computer Education through the University System of Maryland,” Plane explained. “Before it was voted on in the state legislature, I had the chance to testify. Our proposal got an almost unanimous vote, and the proposal to start the center was codified into law in 2018. The state of Maryland is leading the way in computer science education and I’m proud of the small role I was able to play in expanding computer science education in the state.”

Tens of thousands of students have been touched and positively impacted by Plane since she joined UMD’s Department of Computer Science in 1990—each one, as Plane’s favorite proverb says, a drop of water flowing into a roaring river.

“Jan has been a vigorous advocate for women and underrepresented minorities in tech for decades now—her insights will be truly missed here,” Varshney said.

Now, as she retires from UMD, Plane knows that the programs she built have a sturdy foundation, passionate staff and solid resources to continue to thrive.

“I know that we’re moving in the right direction with MCWIC and I4C, and I really feel it can continue to grow and keep the mission going. The fact is that we still have a lot of work to do,” Plane said. “Our staff is all in for supporting both current students and the K-12 pipeline into computing. When you’ve got a dedicated staff like this, there’s no telling where it can grow.”