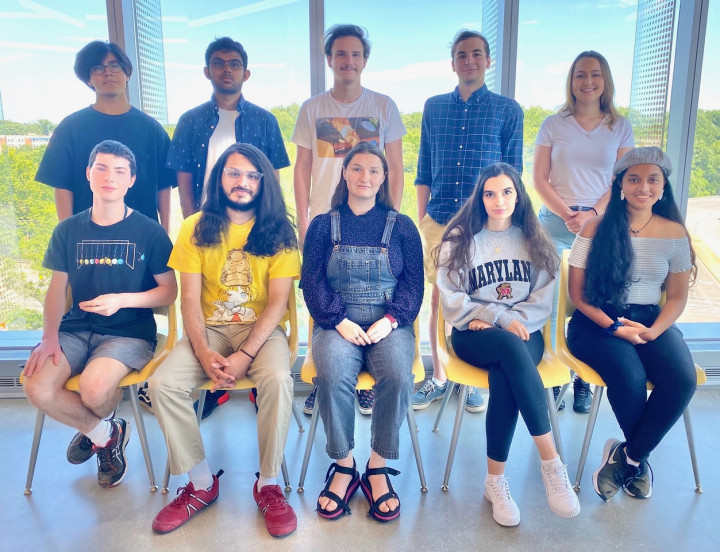 Following the genome revolution, bioinformatics has rapidly risen as an essential field of research. To increase our understanding of health and disease, there is a critical need for scientists with interdisciplinary training to process and analyze large-scale genomic datasets.

The Center for Bioinformatics and Computational Biology (CBCB) is working to fill those ranks. This summer, a group of 10 undergraduate students from across the country are collaborating with University of Maryland faculty and graduate students to research real world problems in metagenomics, machine learning, single-cell RNA sequencing, parallel computing, and more.

The students are part of a prestigious 10-week long internship funded by the National Science Foundation and run by faculty in CBCB. Seventy-one students applied for this year’s Research Experiences for Undergraduates (REU) program, called BRIDGE (Bioinformatics Research In Data science for Genomics).

Students are working in pairs to learn about a research problem, propose a plan to tackle a specific research question, and then implement their plan. At the end of the summer, each team will produce a paper and give an oral presentation on their project.

Michael Cummings, a professor of biology and director of CBCB, says initial research experiences are important in developing scientific careers.

“Such experiences were certainly important for me as an undergraduate student, as they provided opportunities to learn and explore in ways not possible in a regular classroom setting,” he says. “The students in this cohort represent a diversity of backgrounds and interests. They are a talented group and it’s evident that their perspectives have expanded through the research experience this summer.”

Harihara Subrahmaniam Muralidharan, a fourth-year computer science doctoral student who is working with the REU students, says it has been fun getting to know the group.

“It’s been a welcome change to have interns working in person in the lab space after a several year hiatus due to COVID,” he says.

Undergraduates Nicholas Arellano and Esmma Almousa are working with Cummings to develop machine learning models that would better predict the progression of Parkinson’s disease. They are specifically working with longitudinal data, which allows researchers to assess multiple disease aspects, such as the timing of disease onset.

“We’re trying to create a better way of giving a prognosis based off repeated measures of a patient’s data taken over a period of time,” says Arellano, a rising junior majoring in bioinformatics at Towson University.

He adds that the REU internship has provided him a unique opportunity to work with this type of data.

Almousa, a rising senior majoring in data science at University of Wisconsin–Madison, says she’s studied similar data for Alzheimer’s disease during her course of studies at her home institution.

Still, she finds the learning experience she’s having at CBCB this summer invaluable.

“I think it’s interesting to look at neurodegenerative diseases because there’s a lot of unanswered questions, like how to slow down or eliminate their progression,” she says. “I think finding predictors of these diseases earlier is so important because it can help with things like adjusting the patient’s lifestyle or determining therapeutic interventions.”

Arellano and Almousa both say they are enjoying participating in the internship, calling it a supportive and flexible environment.

“I really appreciate that we’re able to meet with our mentors a couple times each week just to ask questions and go over the new tools we’ve learned,” Almousa says. “Working with Dr. Cummings has been a really wonderful and eye-opening experience.”

Adam Levav, a rising junior majoring in computer science at the University of Maryland, is working on a project that involves developing methods to identify misassembled DNA sequences.

There are many technologies for sequencing DNA, but none of them can read an organism’s whole sequence in one go because it is too long, he says. Instead, they get fragments of sequences at several different places in the organism’s DNA, called reads.

This gives scientists a long, unordered list of short reads, which they then attempt to assemble. Based on the overlaps between the reads, they piece them together back into a reconstruction of the original DNA, like a jigsaw puzzle.
“Any error in our reassembled DNA could completely mess up our understanding of the organism,” Levav explains. “For example, if that missing part of the DNA encoded a critical component in the reproduction of a contagious species of bacteria, then we would be completely unable to develop defenses to that bacteria’s reproduction—or worse, develop incorrect defenses. So it’s important to double-check that our reassembled DNA is correct.”

Levav is working with Lucy Mettee, a rising junior majoring in biomedical engineering at the University of Texas at Dallas. They are being mentored by Muralidharan and Mihai Pop, a professor of computer science and director of the University of Maryland Institute for Advanced Computer Studies.

In addition to conducting research, Muralidharan says the group took a field trip to the Smithsonian National Museum of Natural History to see the exhibit “Genome: Unlocking Life’s Code.”