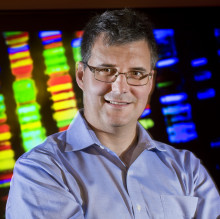 Dr. Pop received his Ph.D. in Computer Science at Johns Hopkins University where he focused on algorithms for computer graphics and Geographic Information Systems (GIS) applications. He then joined The Institute for Genomic Research (TIGR) as a Bioinformatics Scientist, where he was responsible for the development of genome assembly algorithms. During this time, Dr. Pop participated in a number of bacterial and eukaryotic genome projects including important human pathogens such as Bacillus anthracis and Entamoeba hystolitica. Since joining the University of Maryland, Dr. Pop has continued to develop novel approaches for genome assembly and analysis, and has developed extensive expertise in the analysis of metagenomic data. His lab developped a number of widely-used computational tools for the analysis of genomic and metagenomic data. Furthermore, Dr. Pop is active in efforts to diversify the computer science and computational biology communities, both at UMD and more broadly.

Mihai Pop has been invited to give a keynote address at the Finishing in the Future" conference held in Santa Fe, NM, in June 2007.