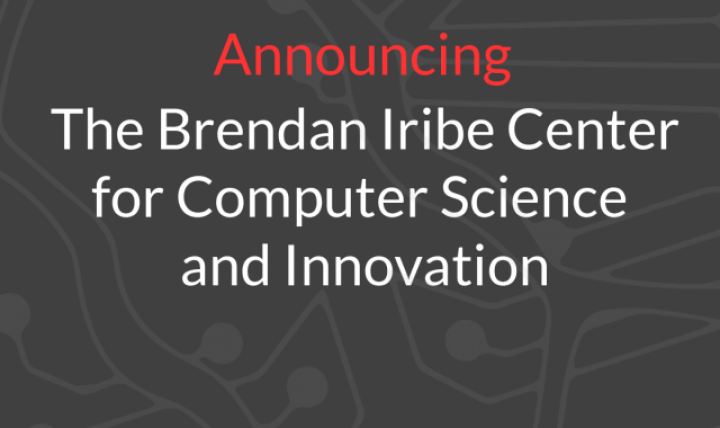 The Computer Science Department is pleased to announce that Brendan Iribe and Michael Antonov have contributed greatly to our future with a combined gift of $38 million to build The Iribe Center for Computer Science and Innovation and provide two scholarships and two endowed chairs. A part of Iribe's gift ($31 million) and Antonov's gift ($4 million) will go towards scholarships as well. In addition, Brendan's mother, Elizabeth Iribe gave $3 million to endow two professorships for Computer Science.  Below is the University's Press Release.  Learn more about this project from the new website dedicated to the building: csctr.cs.umd.edu

COLLEGE PARK, Md. – The University of Maryland announced today a gift of $31 million from Oculus co-founder and CEO and UMD alumnus Brendan Iribe – the largest gift in the university's history. The majority of the gift, $30 million, will help fund construction of the Brendan Iribe Center for Computer Science and Innovation, a new computer science building designed for cutting-edge work in virtual reality, augmented reality, computer vision, robotics and future computing platforms. The remaining $1 million of the gift will establish the Brendan Iribe Scholarship in Computer Science.

"The University of Maryland was an inspiration for me, and the relationships I made there have lasted a lifetime," says Iribe. "I’ve always wanted to give back to the school and public education system, and I hope this building will shape the future of computer science students at the university. The space is designed for hackers, makers and engineers, which will help give rise to future breakthroughs, products and startups that will transform the way we live and interact with the world around us."

In addition, Oculus chief software architect and co-founder and 2003 UMD graduate Michael Antonov is making a gift of $4 million to the university. Most of this gift, $3.5 million, will support construction of the building, and $500,000 will fund scholarships. An additional gift of $3 million from Elizabeth Iribe, Brendan’s mother, will establish two endowed chairs in the Department of Computer Science.

"I've been passionate about computer science my whole life, and my experience at the University of Maryland fed that passion even more," says Antonov. "My hope is that this gift will give UMD students access to world-class resources and facilities for computer science that enables them to achieve the seemingly impossible."

“The transformative vision and support of Brendan, together with the exceptional commitment of his mother, Liz, and his UMD classmate Michael, will create a unique space where students from all disciplines can imagine, build, collaborate, and succeed together,” says University of Maryland President Wallace Loh. “This is truly a space that will mold future innovators and entrepreneurs and spark economic vitality in Maryland and beyond.”

The new, state-of-the-art facility will be a hub for cutting-edge computer science research and an incubator for technology and innovation. The building’s design encourages collaboration, with an emphasis on hacker/maker spaces and team breakout areas.

“The Iribe Center will feature state-of-the-art maker spaces with access to new equipment and resources that enable students and faculty to bring their ideas to life in ways that were previously inaccessible,” says Jayanth Banavar, dean of the College of Computer, Mathematical, and Natural Sciences. “It’s exciting to be working on the cutting-edge of the field, alongside Brendan, Michael, and the team at Oculus, and I’m looking forward to seeing what our community creates.”

“This is the beginning of a long-term commitment toward transforming education -- many of my best memories and relationships came from the University of Maryland, and I hope this gift fosters more life-changing friendships and partnerships like the one between Michael and me,” says Iribe. “I truly believe virtual reality is the future of computing, with an impact that will be as big, if not bigger, than the jump to 3-D graphics or mobile devices. This gift positions Maryland to be one of the leading institutions for virtual reality in the world.”

This gift will support the university’s growing computer science department, which recently ranked 17th in the Academic Ranking of World Universities and 15th in the U.S. News & World Report rankings of graduate programs. Undergraduate enrollment in the department has more than doubled in the past eight years to over 2,000 students and more than 200 students are pursuing graduate degrees.