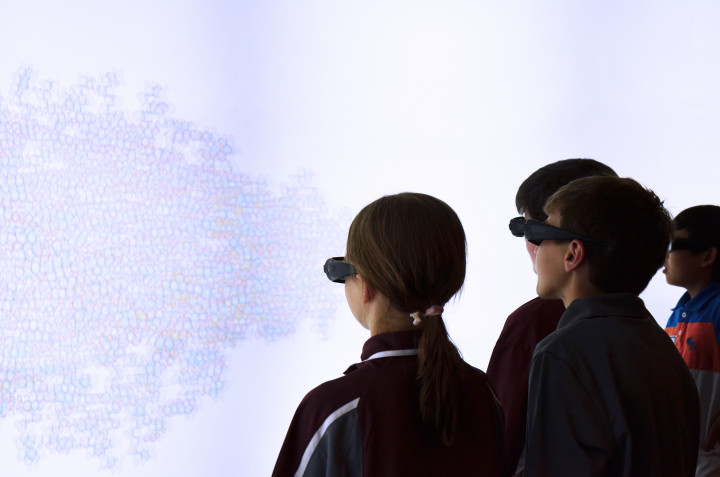 A group of eight fifth-grade robotics team students, ten of their parents, and two of their robotics coaches from Sparks Elementary School in Baltimore County, Maryland visited the Department of Computer Science this Thursday, June 4. The visit came in the wake of the team's high placings at the VEX Robotics World Championship in Louisville, Kentucky this past April.

The eight students and their twelve parents and teachers got to see a variety of the Department's research throughout the day, beginning with a visit to the Autonomy, Robotics, and Cognition (ARC) Laboratory at 10:00am. There, Professors Yiannis Aloimonos and Don Perlis, Associate Research Scientist Cornelia Fermüller, and graduate student Yi Li demonstrated their work in robotics to the visitors. Julia, a Baxter robot developed by the ARC Lab which has received significant coverage for its ability to learn cooking processes from watching people cook, was a particularly engaging topic of discussion. ”It's like The Jetsons!” remarked one parent, after seeing Julia go through the steps of preparing a salad. 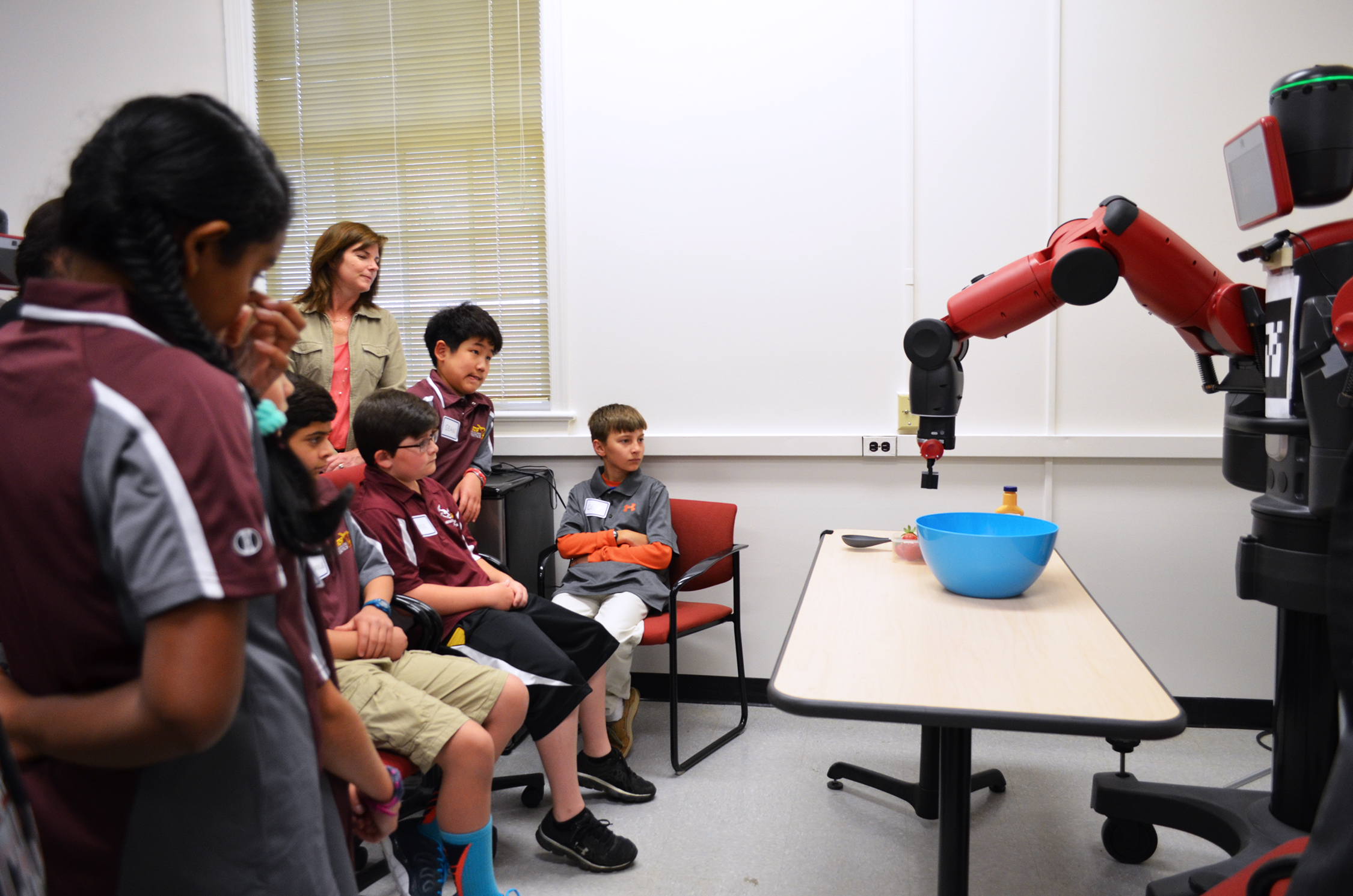 The already-accomplished students were excited to see the robots in progress. ”The world is waiting for guys like you!” encouraged Professor Aloimonos.

After the ARC Lab, the students visited the UMIACS conference room in A.V. Williams for a talk with Brandi Adams, the organizer of the day's events and Associate Director of Undergraduate Studies in the Computer Science Department. ”Yes,” Adams admitted with a smile, ”This is a pitch to get you to study Computer Science.” 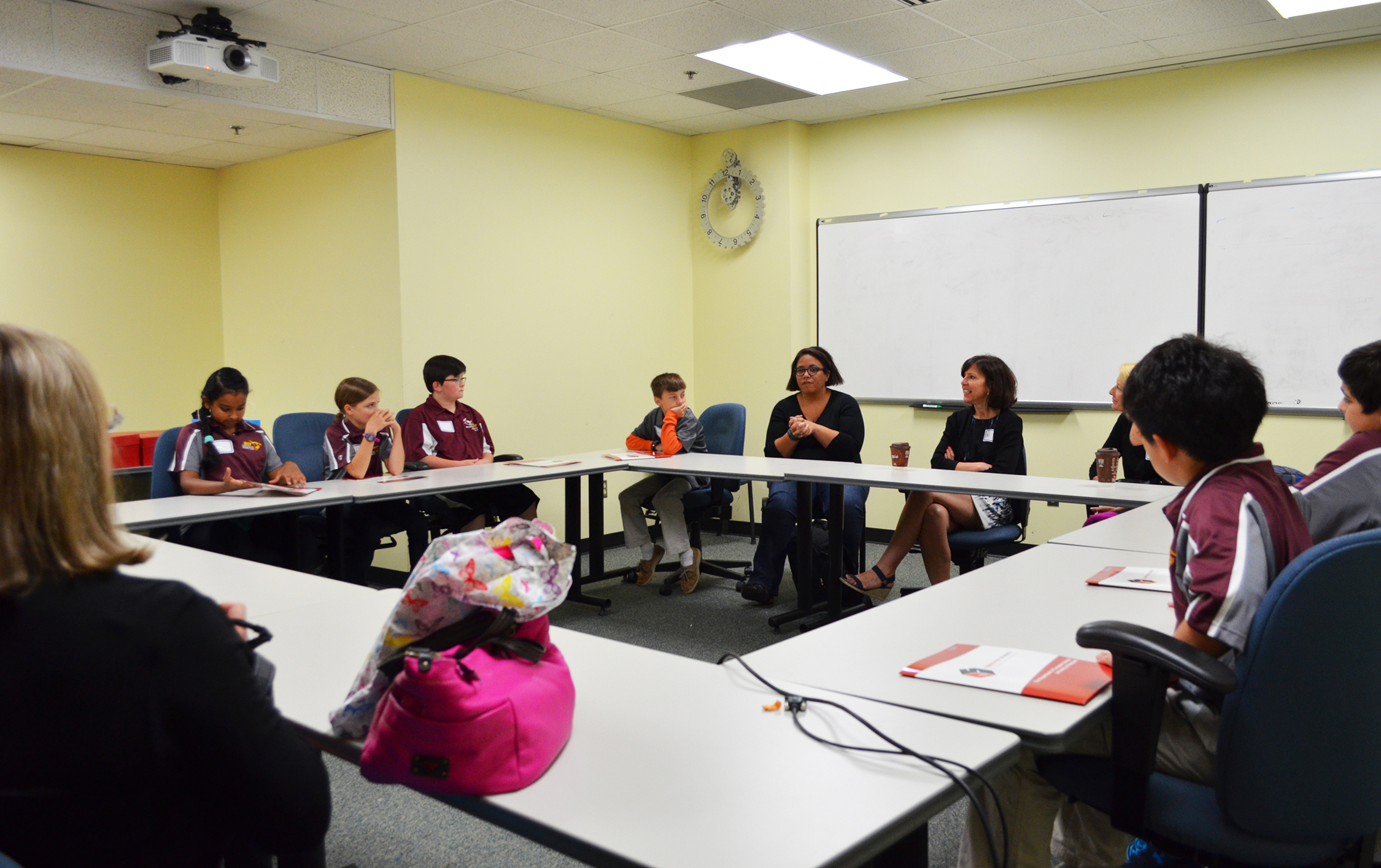 Lunch came next, at noon in the conference room. Shortly after, Dr. Jandelyn Plane talked to the students about her work directing the Computer Science Connect Camp, a summer day camp continuing monthly throughout the school year for middle school students. 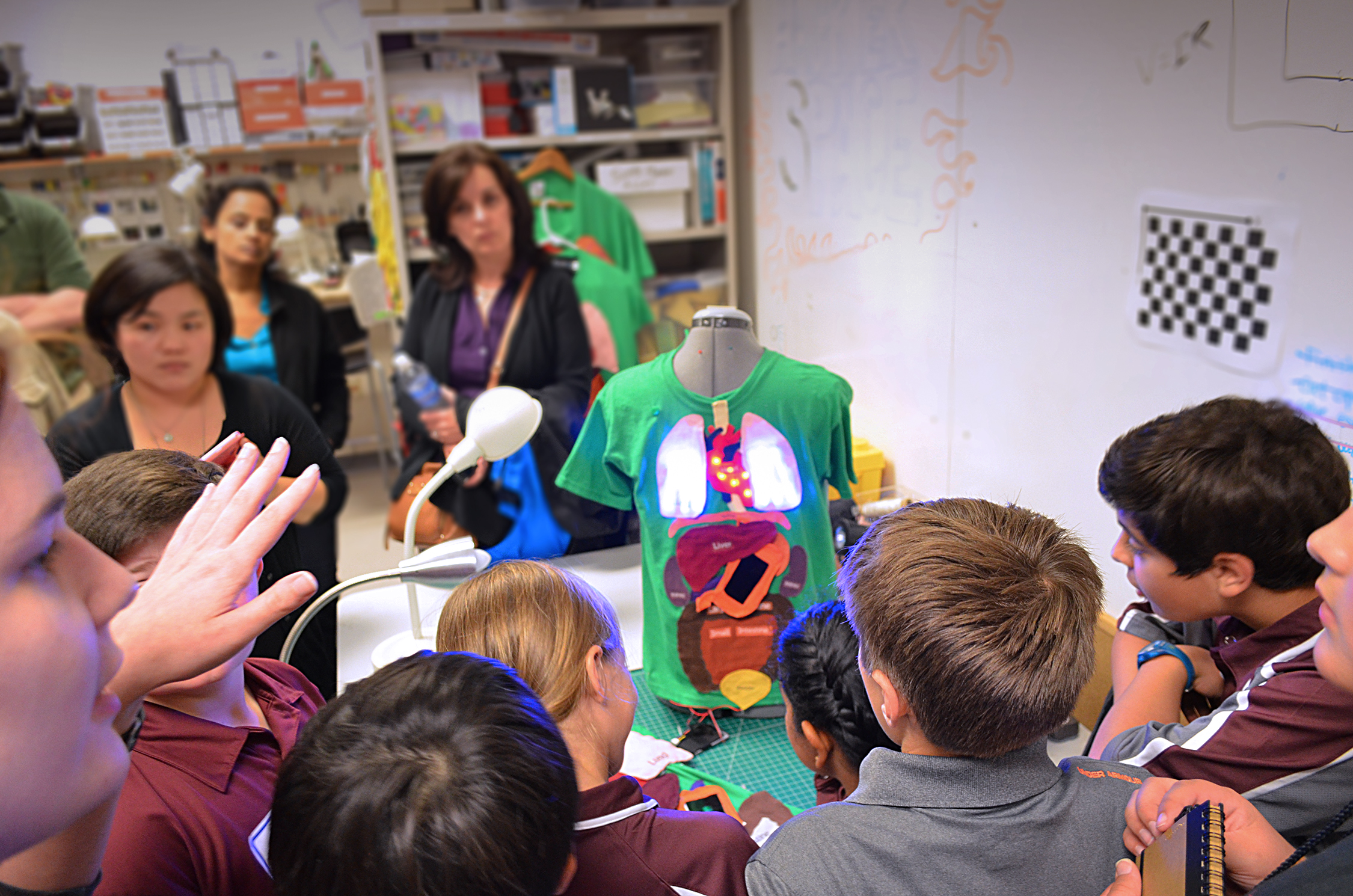 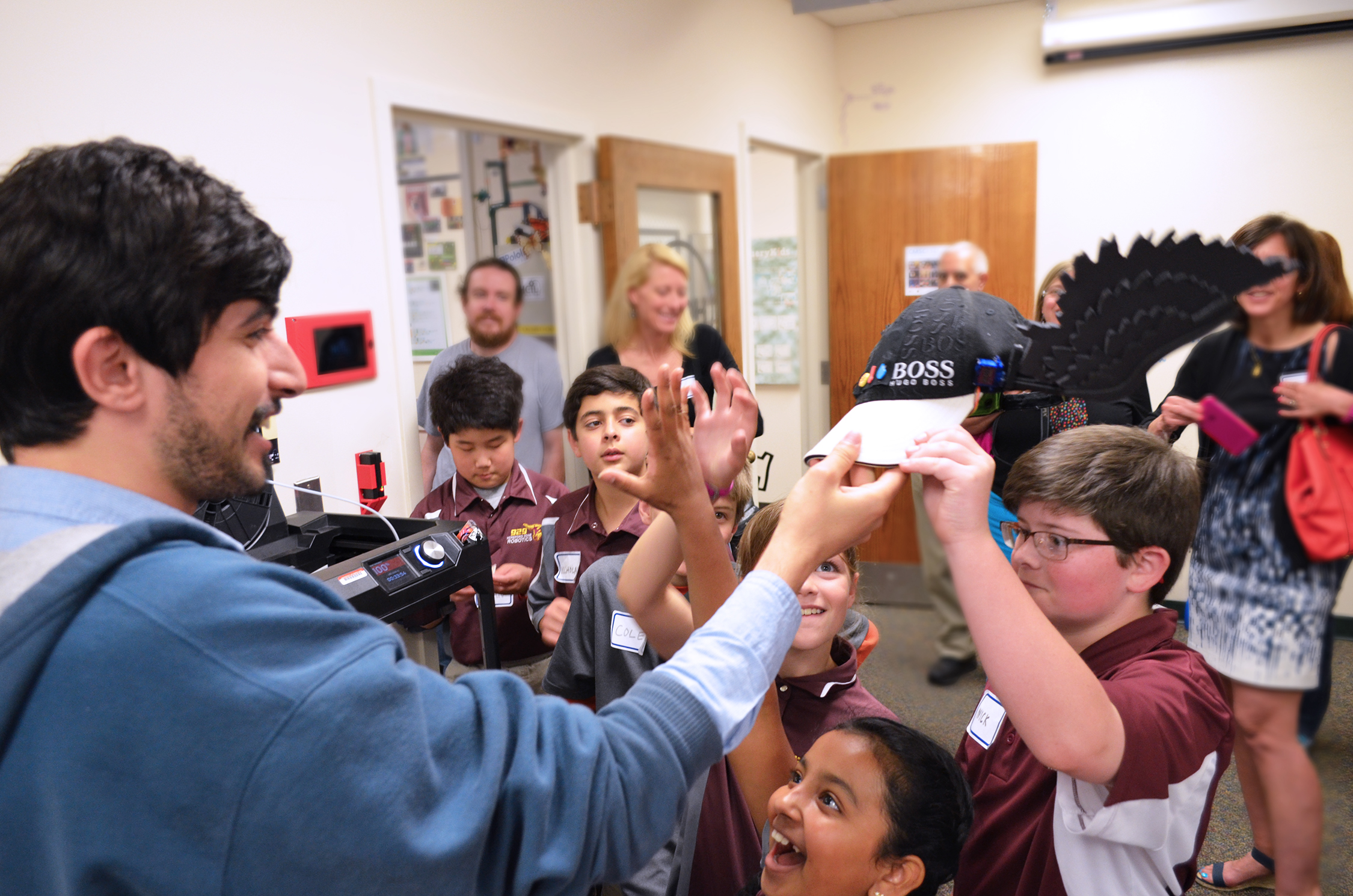 At 1:15pm, the Sparks students met with graduate students for a tour of the Human-Computer Interaction Lab (HCIL), located in Hornbake Library. Though the space was packed full of interesting projects, the students made sure to look at and interact with a ton of them. The BodyVis shirt (shown above, left), a hat that monitored the amount of Ultraviolet light hitting it (shown above, right), and the HCIL's 3D printer were of particular interest to the visitors. 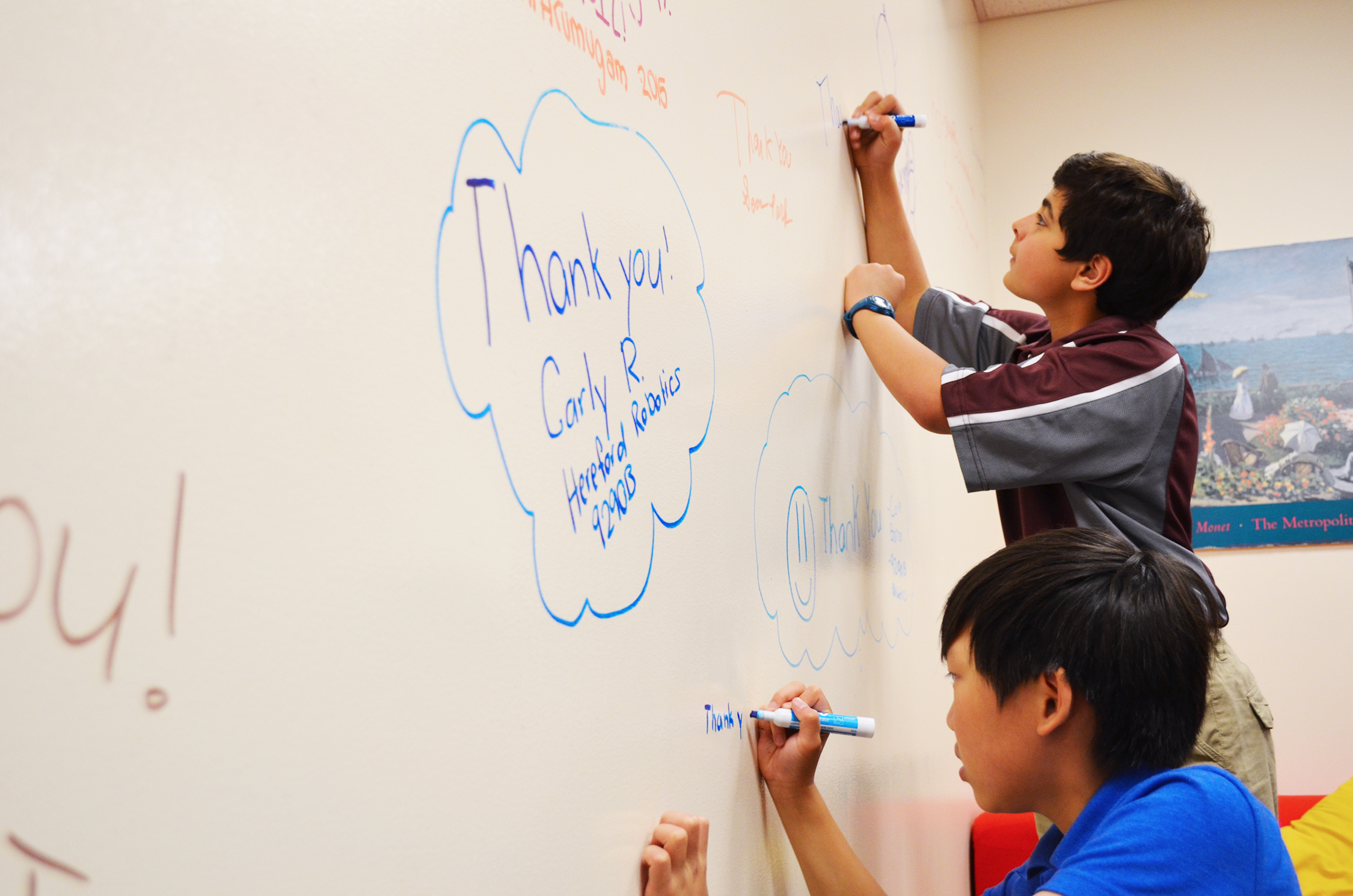 At 2:15pm the Virtual Reality Augmentarium back in A.V. Williams was the group's next destination, where Professor Amitabh Varshney and graduate student Hsueh-Chien Cheng demonstrated molecular visualization, virtual reality immersion, and a host of other interesting technologies being worked on. 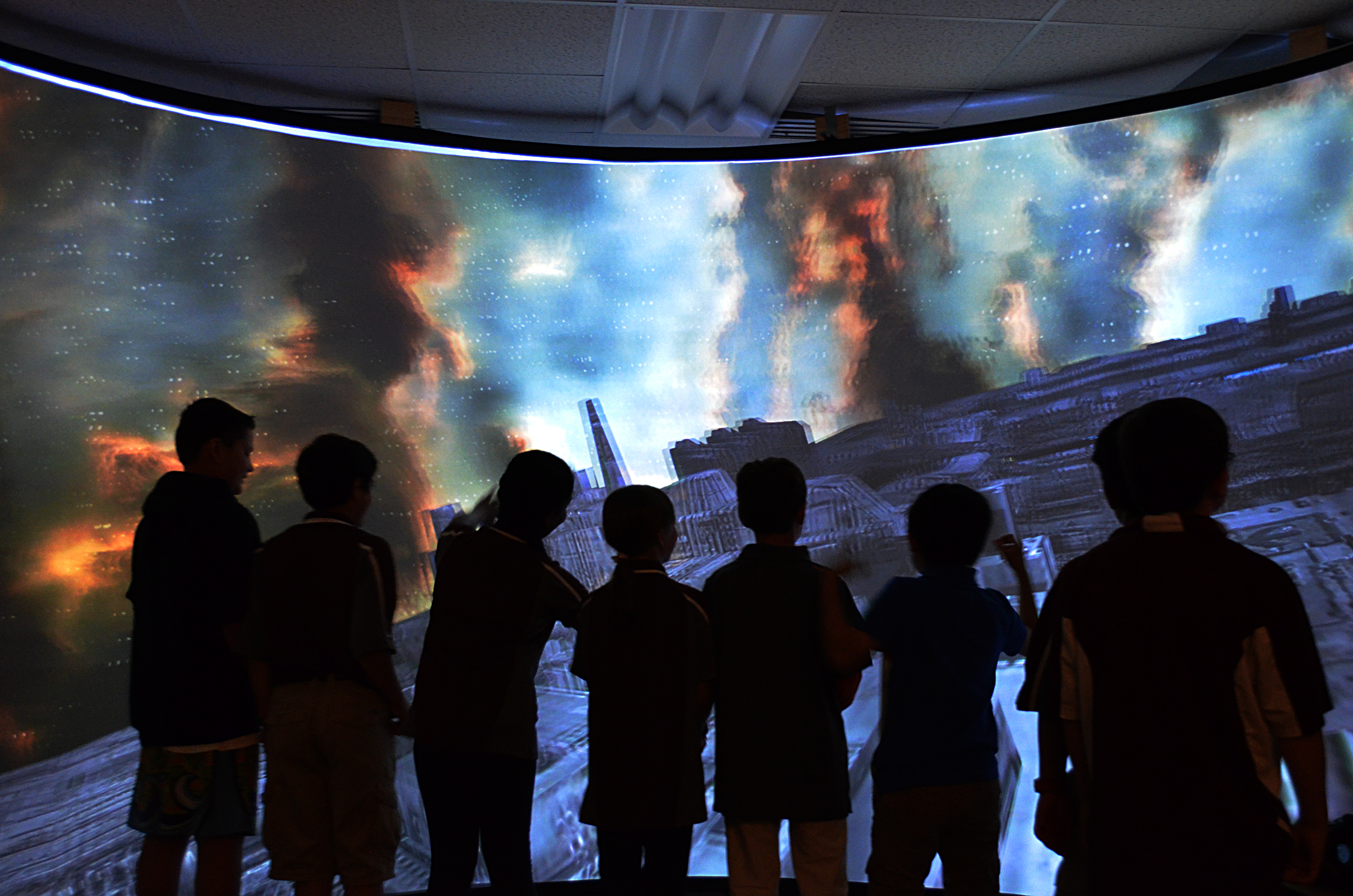 Lastly, the students met back in the conference room at 3:00pm, where—with delicious ice cream from the Maryland Dairy—they listened to a talk from Elizabeth Stevinson Iribe Chair for Computer Science Dr. Samir Khuller on algorithms, his work, and continuing learning more about computer science.

Sparks sent two teams of fifth-graders to the VEX Robotics World Championship this year, the first year of Sparks' robotics team. Out of the 88 teams in attendance, Sparks' teams placed in 9th and in 55th. ”It was terrific to see how the students from Sparks Elementary reacted to being in a university environment,” writes Brandi Adams, the event's organizer and Associate Director of Undergraduate Studies in the Computer Science Department. ”They were engaged, interested, and very pleased to be at the University of Maryland.”

The Department extends its congratulations to the Sparks community for their impressive accomplishments, and hopes to see them again!