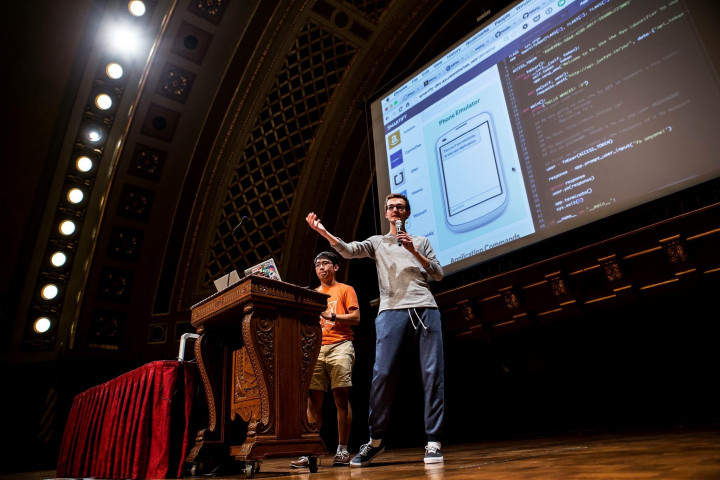 If you've ever gone to a hackathon or belong to any sort of social coding group, then you've probably heard of MHacks. The 36-hour event, founded in 2013 at the University of Michigan and now in its sixth iteration, has established itself as one of the largest (hosting 1500 participants) and most prestigious hackathons in the collegiate scene. It should come as no surprise, then, that our very own Terrapin Hackers have established themselves as regulars at MHacks, sending a slew of eager first-time hackers and veterans alike to Ann Arbor each semester.

I sat down with Colin King and Sean Bae (both CS '18) to discuss Smartify, which took second overall place at this fall's MHacks. “We started from the need,” said Sean. “70% of the world has never owned a smartphone, and many third world countries lack access to [cellular broadband].” This jarring fact led Colin and Sean to an idea: building an App Store and development platform around SMS text messages. The result would become Smartify, which glues the SMS infrastructure to applications like banking and social media via Twilio's messaging API. Users can issue commands via text message to a designated phone number, which replies in turn with results from the requested service. Smartify also provides an online phone emulator, development environment, and “Core Framework,” easing the creating of new applications for the platform. “We do all processing in the cloud,” said Colin. “Everything happens real time using Firebase (a database service) and Azure (a cloud platform offered by Microsoft).”

To be fair, this is hardly Sean or Colin's first hackathon experience. “We've been to 9 hackathons together,” said Sean. “MHacks is fun – it's high energy, and the food is great.” That doesn't make big-name hackathons the sole domain of pros, however: 40% of MHacks 6 attendees were first-time hackathon goers. “Don't be intimidated – get a mentor and team up with experienced friends,” the two advise. “Use all the free resources available to you. Don't worry about the prizes, just identify what humanity needs and do your best to solve it.”

MHacks may be over, but the fall hackathon season is still going strong. Prospective hackers are encouraged to connect with the Terrapin Hackers, who provide both transportation to nearby hackathons and “hacktorials” on common skills and development tools used at hackathons. Upcoming events include the health-and-society oriented HackDuke as well as Technica, UMD's very first all-ladies hackathon. Whether you have the next great idea or just want to relax and learn some new coding skills in the company of your peers, the hackathon community is here to help.