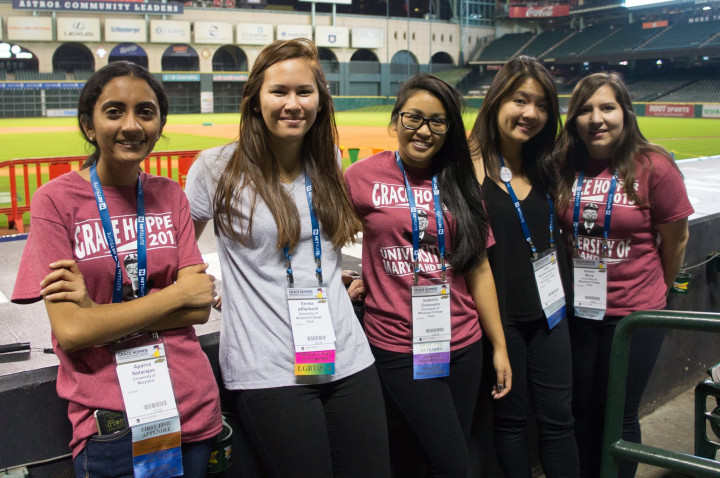 This October, the University of Maryland sent 44 students to Austin, Texas, for the 2015 Grace Hopper Conference.  We also had 19 attend this year’s Code(Her) conference in Washington, DC.  On October 21st, there was an event to recap the two diversity conferences as well as a dessert social for students and sponsors.  The panel had 8 young women in computer science answering questions and was moderated by Phyllis Kolmus of AT&T Government Solutions.

The first question was about what they learned at the conferences.  Freshman Fonda Li, who went to Code(Her), got to participate in UI workshops for the first time.  “It’s something that wasn’t available to me before, so it was fun to learn about.”  Sophomore Charell Adalago attended workshops about eLearning at Code(Her) as well.  “It was like a really fun, hands-on, day of school.”  Junior Michelle Cody brought up how you don’t realize how often people forget about the contributions of women when talking about computer science.  “You think about influential people and you think Babbage or Alan Turing, not Ada Lovelace, Anita Borg, or Grace Hopper,” she explained.  The Grace Hopper conference had a psychology professor from UVA speak about this phenomenon and related it to the problem of women leaving the field.  “[Women] have been an equal part, but not always talked about.”

Next the panel talked about the overall experience of going to conferences about women in computer science.  After talking to other women at the conference and sharing experiences in their field and at their universities, senior Xinyi Wang realized just how different University of Maryland was when compared to other schools.  “Our school is so much more supportive and inclusive than other schools I heard of,” she explained.  Senior Izzy Coronado said it was refreshing to be able to talk frankly about the female experience in Computer Science, and that it changed her perspective.  “Meeting so many women and talking to them about their experiences helped make me more sensitive to microaggressions and how they might affect people.”

When asked what her favorite thing about the conference was, freshman Blue recalled how she got to talk to a woman from Nigeria, who worked at an almost all women startup.  “It was amazing to speak with her, because she and her team all worked so hard and they earned it.”  Junior Sylvia Kang said her favorite memory was when she attended a cybersecurity workshop.  “The workshop leader showed us how to hack her ex-boyfriend’s website,” she explained, laughing.  “The ex-boyfriend gave her permission, but it was a really fun way to learn.”

Charell Adalago was surprised by the number of men in attendance, and just how supportive they all were.  “It’s a battle, and it helps to know guys are helping too.”  Another surprising thing for Sylvia Kang was the breadth of backgrounds.  “There were women in business, women who were designers -- it shows how you can be in Computer Science and not be restricted to programming,” Sylvia explained.

Bill Pugh, who sponsored the 19 students that went to Code(Her), asked what aspect of the conferences they would want to bring back to the University of Maryland.  Michelle Cody said that she wanted implicit gender bias to at least be talked about in the department.  “Implicit gender bias tests show that biases still come up, even in other women.  It’s good to get it out there and understanding it’s something you can get past.”  Rebecca Thomas said she enjoys what the AWC is currently doing, but would love to have more AWC tech talks, like the one Google hosted in the Spring semester.

The night ended with a talk by Jill Singer, VP of National Security at AT&T Government, who gave advice about career success both for those starting out and those well into their careers.  Her advice included staying technically competent and evolving your own personal skills, seeking out mentors and coaches to help you grow personally and professionally, and to never forget about your soft skills.  “Regardless of what you do as a job, you have to be able to sell your skills and ideas,” she explained.  “So that means developing skills like communication, professional writing, leadership, and even marketing.  Know how to present yourself and you’ll be more successful in life.”