Andrea Bajcsy and Frank Cangialosi recognized for research by CRA 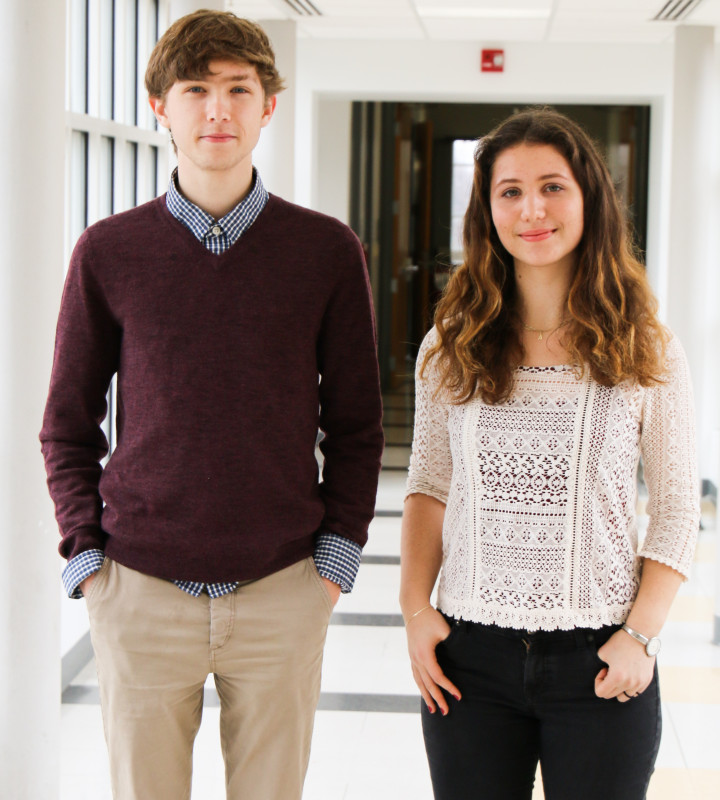 In a time when most of their peers are headed to industry to work for large companies or startups around the country, Andrea Bajcsy and Frank Cangialosi are moving counter to that trend and applying to graduate schools for PhDs in Computer Science.  Bajcsy is primarily interested in Computer Vision and Robotics, and Cangialosi is interested in Networks and Network Measurement. The two outstanding students agreed to sit down for an interview to talk about their research, their research advisors, the experiences that they have had at the University of Maryland in the Computer Science Department, and what they’ve learned while they have been here.

Both students are extremely clever, determined, and intellectually curious. They each clearly articulate their interests and goals with excitement and ease, and look forward to the day when they can be professors themselves.  When asked to give a summary of the work that they accomplished for the CRA research awards, they spoke about outside collaborators and the joys they each found by working on open problems.

Andrea Bajcsy mentioned that even though she came from a family of computer scientists, she didn't want to major in the field. In fact, at the beginning of her education here, she focused on everything but Computer Science.  “When I came to UMD, I was an undecided major. I was interested in so many things, so I took classes in a bunch of different areas. It was hard for me to decide [on a major] because I liked it all.” Then she discovered that Computer Science would allow her to work on problems across several different fields, and she ultimately decided to focus on robotic perception. She does her research with Computer Science Professor Yiannis Aloimonos, who is also the Director of the Computer Vision Laboratory.   Bajcsy also credits her continuing interest in robotics to her time spent in the Summer of 2015 conducting research with Professor Ronald Fearing at University of California Berkeley in the Biomimetic Millisystems lab.  Bajcsy says that working with both these professors helped her to understand how to translate specific data. “The major goals of the field are to look at sensory data and to bring meaning to it and bring it into action of the world,” she said.  For Bajcsy, research is exciting. “There are problems that are open-ended and not google-able,” she said.

Frank Cangialosi, on the other hand, knew that he wanted to be a computer science major, but he was not terribly interested in research until he registered for Professor Neil Spring’s CMSC396H course, a requirement for the Computer Science Honors Program.  During that course, he was put into a group led by Dr. Dave Levin, an Assistant Research Scientist with UMIACS. “When my group and I found that we couldn’t solve our problem (detecting censorship in Tor) because we didn’t have the proper tool to measure latency between ToR nodes, I approached Dave about working on this problem more,” he said. From that point forward, Cangialosi began working with Levin, on this project eventually presenting it at IMC Tokyo 2015.  While working with Levin, Cangialosi has also had the opportunity to work with other Networks researchers including Professor Alan Mislove of Northeastern University.   The work that he did with Levin also convinced Cangialosi that research was anything but boring, and that a career in academia could be an interesting one with a variety of problems to solve. “I am someone who likes learning. A lot,” he said.

When asked about what they enjoyed about working with their research advisors, Andrea Bajcsy said that “The coolest thing about working with [Aloimonos] is ideas.” She praised her advisor for his openness and willing to discuss a variety of challenges in the field.  “The crux of a good research problem is the problem itself,” she continued.  “The hardest part is finding what is new interesting and worth spending time on. I really appreciate the insight and the discussions that I have with him because we get to think about not only what is useful for us tomorrow, but what will be useful in 20 years down the road.”

For Frank Cangialosi, working with Levin is also the constant flow of ideas. “That’s the best part of working with [Levin]. I don’t know where all of these ideas come from, but they don’t stop.  He always has insightful things to stay about any kind of problem and I constantly learn from him—even in an hour long meeting. I’m always learning about new things. He has an impressive background knowledge in Computer Science and he has a way to bring in information from subfields that aren’t even his specialty.  Meeting with him opens my mind to a bunch of different possibilities. It is impressive how he brings in that knowledge and has so many ideas.”

Bajcsy and Cangialosi are the latest in a line of students from the University of Maryland to be recognized by the CRA for their research abilities, and like the winners before them, are likely to go on to illustrious careers in Computer Science.