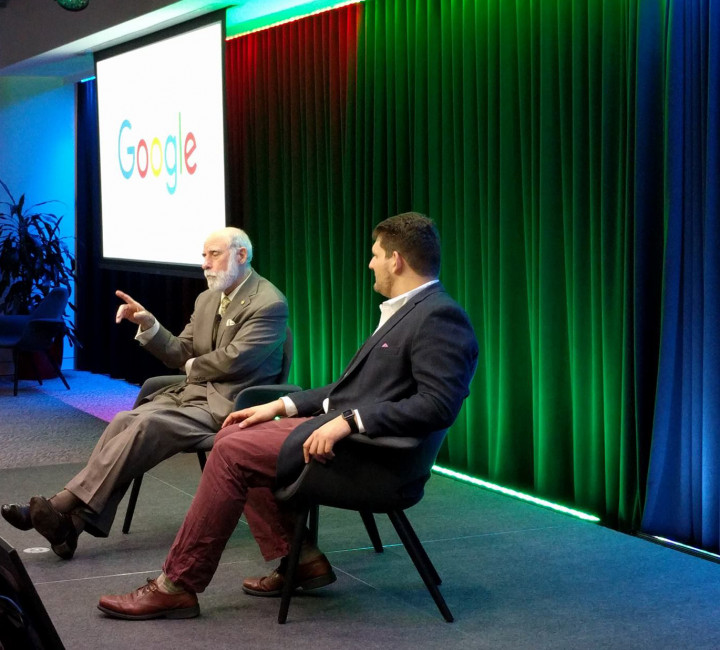 Mr. Danny Laurence (’14), an alumnus of the QUEST program and the Department of Computer Science, moderated the event. He and Cerf sat on small stage in an intimate auditorium for a fireside-style chat.  QUEST students and alumni sat in the audience listening attentively as Cerf addressed questions they submitted before the evening’s event.

Laurence was particularly thrilled to moderate the talk. He mentioned that his computer science Professor Bobby Bhattacharjee told him that one of the greatest parts about Computer Science is that he would be able to meet his heroes. “Vint is certainly at the top of my [heroes] list,” Laurence continued, “[he] has been my hero since middle school--my dad worked at MCI mail with him.”

The talk itself centered on Cerf and his work at Google, what it means to be a Chief Internet Evangelist—a title that comes with what Laurence called “an impressive amount of duties.” As the Chief Internet Evangelist for Google, Cerf engages with public policy, follows research and development, and works closely with institutions including the National Science Foundation (NSF) and the Association for Computing Machinery (ACM).

As for moderating the talk, Laurence said that it was much easier than he had expected. “Vint is a superb orator, no doubt because his understanding of topics in computing is so extremely nuanced,” he said. The QUEST students and alumni asked questions addressing subjects including net neutrality, artificial intelligence, healthcare, wearables, and the internet of things. “Vint skillfully addressed all of these topics, and he often joked and corrected my world choice about some of these issues. His humor was one of the many things that likely surprised students who had never heard him speak before.”

“Getting to meet Vint Cerf was an incredibly unique and inspiring experience,” said Joel Samelson, a QUEST program graduating senior who is majoring in computer science.  He mentioned that getting the chance to listen to Cerf’s stories about how shaping the Internet encouraged him to think about how he can keep learning and improving himself.  Samuelson was especially inpressed by Cerf’s advice to “be informed and look out for the ‘next big thing’ so that we can make a better technological future.”

When asked about his experience, Wali Rifai, a sophomore QUEST program member who is also majoring in computer science said, “What a day that was! It is events like these that make me glad I am a QUEST student.” 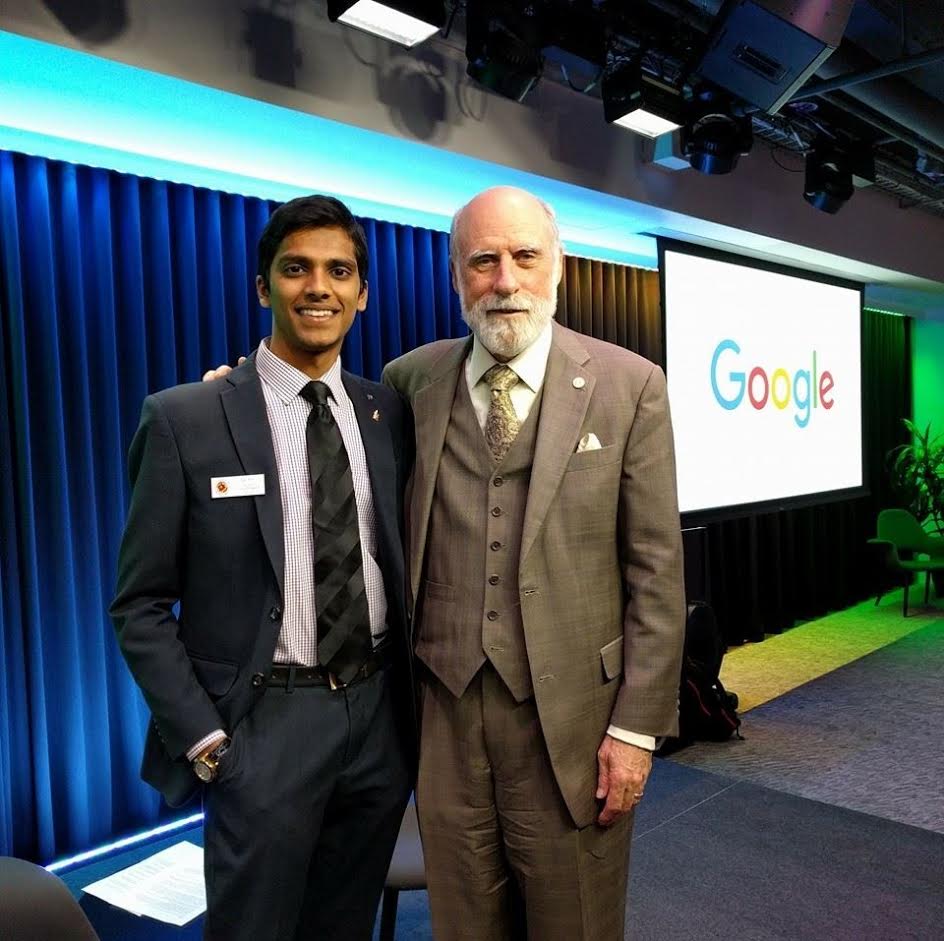 Rifai was thrilled to listen to Cerf talk about his life, work experience, and future outlook of technology and technological processes.  Meeting Cerf helped him to figure out his place in the world of computer science. “I learned that the results of academic research can bubble up and benefit all of society for the rest of time, changing the face of the world.”  This meeting is something that Rifai will think of as a defining moment in his life as a computer scientist. “I will never forget [this meeting] in my life,” he said, “especially as a Computer Science enthusiast. I am truly privileged to have such opportunities as a QUEST student and to be an undergraduate in one of the top CS departments in the world.”