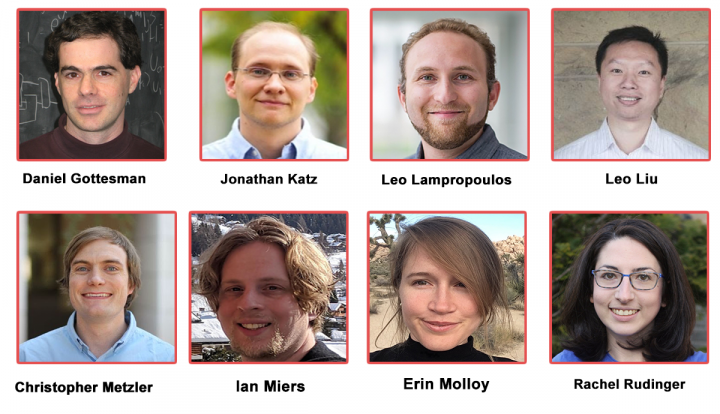 The department is pleased to announce our newest professors of computer science. This new group of professors, joining this fall, brings in research expertise ranging from cybersecurity to data visualization, from cryptography to natural language processing and more.

“The department is delighted to welcome our new faculty members. They represent a tremendous amount of knowledge and expertise in critical research areas that will further strengthen the educational and research capacity of our department.” said interim chair Matthias Zwicker.

Katz conducts research on cryptography and cybersecurity. He is a returning faculty joining UMD from George Mason University where he held the title of Eminent Scholar in Cybersecurity. Prior to that, he was a faculty member in the computer science department at the University of Maryland and the Director of the Maryland Cybersecurity Center. Holding a PhD from Columbia University, Katz has worked on various aspects of cryptography, computer security, and theoretical computer science including secure multi-party computation, post-quantum cryptography, public-key encryption, and digital signatures.

A Victor Basili postdoctoral fellow, Leonidas Lampropoulos got his Ph.D. from the University of Pennsylvania.  His research interests lie in programming languages, with an emphasis on software correctness through both random testing and mechanized verification. He previously conducted an internship at Microsoft Research Cambridge working on generating adversarial counter examples for deep convolutional neural networks. He is the principal author of the fourth volume in the popular Software Foundations series of online textbooks: "QuickChick: Property-Based Testing in Coq".

Zhicheng "Leo" Liu’s research focuses on supporting data analysis and communication through expressive and scalable visualization tools. Prior to joining UMD he was a research scientist at the Creative Intelligence Lab, Adobe Research, where he worked on data visualization and human-computer interaction. Liu received his PhD in the Human-Centered Computing program from Georgia Tech and was a postdoctoral fellow at the Department of Computer Science of Stanford University. His research has received two Best Paper Awards at ACM CHI, a Test of Time Award at IEEE VAST, multiple Best Paper Honorable Mentions at IEEE InfoVis, IEEE VAST and ACM CHI, and dissertation awards from Georgia Tech and the IEEE Visualization and Graphics Technical Committee.

A  PhD from Rice University, Metzler’s research focuses on developing data-driven solutions to challenging imaging problems. Prior to UMD Metzler was an Intelligence Community Postdoctoral Research Fellow in the Stanford Computational Imaging Lab. He has been an NSF Graduate Research Fellow, a DoD NDSEG Fellow, and a NASA Texas Space Grant Consortium Fellow in the Digital Signal Processing and Computational Imaging Labs at Rice University.

Miers’s research focuses on computer security and applied cryptography. His work takes a context-driven approach to making cryptographic systems secure, reasoning backwards from real-world problems to design deployable cryptographic protocols that address the subtleties of security for production systems. This includes Zerocoin and Zerocash, the first systems to provide strongly private payments on top of public blockchains. His work is also focused on  improving the security of mobile messaging, including attacks on iMessage and new techniques for forward secure encryption that guard against the exposure of encryption keys.

Before joining UMD, he was a postdoctoral researcher at Cornell Tech. Miers received his doctorate in computer science from Johns Hopkins University in 2017.

Rudinger will work in the Computational Linguistics and Information Processing (CLIP) Lab. Her research focuses on problems in natural language understanding, computational semantics, commonsense reasoning, and fairness in NLP. Rudinger received her doctorate in computer science from the Johns Hopkins University Center for Language and Speech Processing. Before joining UMD, she was a postdoctoral fellow at the Allen Institute for Artificial Intelligence (AI2) in Seattle, joint with the University of Washington.

In addition, two more professors will join the department in Fall 2021:

Gottesman’s work is focused towards quantum computation and quantum information. He has worked in a number of subfields, particularly quantum error correction, fault-tolerant quantum computation, quantum complexity theory, and quantum cryptography. Gottesman is best known for developing the stabilizer code formalism for creating and describing a large class of quantum codes, and for work on performing quantum gates using quantum teleportation. Gottesman received his Ph.D. at Caltech in 1997, and did postdocs at Los Alamos National Lab and Microsoft Research, after which he served in the UC Berkeley CS department as a Long-Term CMI Prize Fellow with the Clay Mathematics Institute.

Prior to joining UMD, he was a faculty member at the Perimeter Institute in Waterloo, Ontario. He was also a Senior Scientist with the company Quantum Benchmark.

Erin Molloy's research combines discrete optimization, graph algorithms, statistics, and high performance computing to make sense of large genomic datasets. In particular, she concentrates on designing statistical methods that have provable guarantees (e.g. consistency) and that can effectively utilize distributed-memory systems. While much of her work focuses on algorithms for estimating evolutionary trees (phylogenies), she also is interested in methods for population genomics as well as how core bioinformatics tasks can be improved through modeling evolutionary processes at different scales. Molloy earned her PhD in computer science from the University of Illinois at Urbana Champaign. Her dissertation research was supported by the NSF Graduate Research Fellowship, the Cohen Graduate Fellowship in Computer Science, two exploratory allocations on the Blue Waters supercomputer, and a residency at the Institute for Pure and Applied Math's long program: Science at Extreme Scales—Where Big Data Meets Large Scale Computing.

Molloy will join the department in Fall 2021, after finishing a one-year position as a postdoctoral scholar at the University of California, Los Angeles.