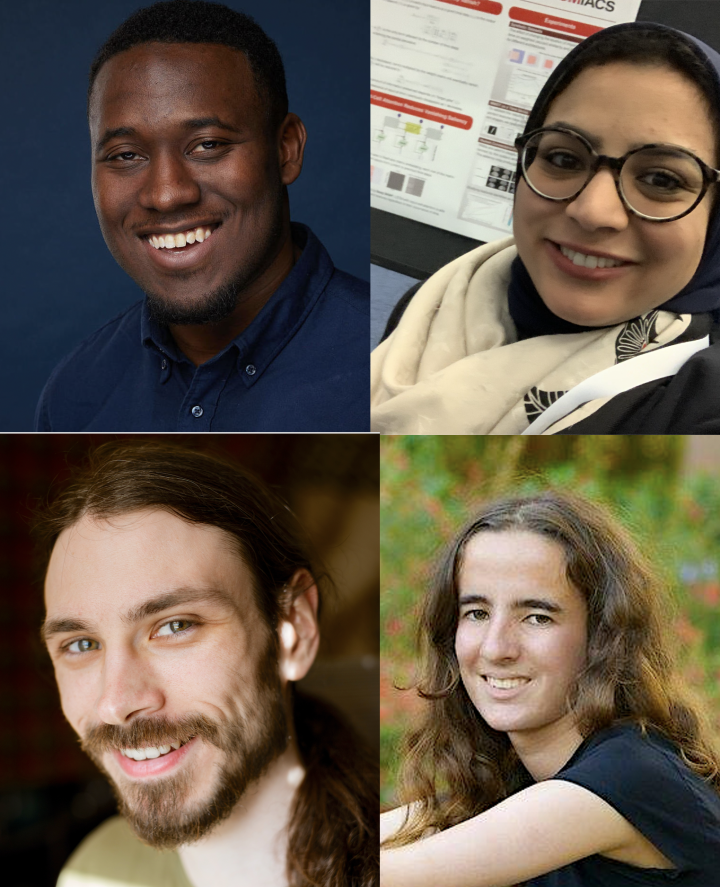 The fellowship provides a $15,000 stipend and other benefits to University of Maryland doctoral candidates who are in the latter stages of writing their dissertations. It is named for Ann Wylie, a professor emerita in geology who has served in numerous roles at the university for almost 50 years, including her current role as interim senior vice president and provost.

(Clockwise from top left in photo) Kianté Brantley, Aya Abdelsalam Ismail, Greg Davis and Marina Knittel each received a fellowship for academic year 2021–2022. All are fifth-year doctoral students except for Knittel, who is in her third year.

“Congratulations to this year’s awardees,” said Matthias Zwicker, interim chair and professor of computer science. “Students in computer science are annually awarded these highly competitive fellowships, which recognize their hard work and dedication to their research, as well as the mentoring they’ve received from their faculty advisors."

Brantley’s current research is to understand and develop sequential decision-making algorithms that leverage various forms of expert feedback, and which have theoretical guarantees and work well in practice.

Working in the Computational Linguistics and Information Processing (CLIP) Laboratory, Brantley plans to first study theoretically and empirically how to leverage computational oracles in two-player games, using ideas from variational inequalities. He’ll then investigate a new form of expert feedback called “comparison oracles,” wherein an expert will rank given instances. Ultimately, he says, this concept might be used in health care settings, assessing patient conditions after performing a sequence of actions (i.e., doses of medicine, etc.).

Brantley is advised by Hal Daumé III, a professor of computer science with joint appointments in the Language Science Center and the University of Maryland Institute for Advanced Computer Studies (UMIACS).

“Kianté is the sort of student who you can drop in any situation and he’ll find a way to learn from others and make progress on hard problems,” Daumé says. “Plus, people want to work with him—he’s smart, diligent, and also a pleasure to interact with.”

Ismail’s research focuses mainly on the explainability and interpretability of predictions made by deep neural nets. She previously analyzed the use of existing saliency-based interpretability methods for Recurrent Neural Networks, wherein she showed that such methods are incapable of reliably detecting important features at arbitrary time intervals.

Ismail has also created an evaluation framework based on time series data for interpretability methods and neural architectures.

Currently, she has focused on building inherently interpretable neural architectures for time series. Having interpretable neural networks will help increase the transparency of neural models for time series and ease their applications in a variety of research areas such as neuroscience, medicine, and finance. Ismail says understanding how a model makes its decisions can help guide modifications to the model to produce better and fairer results.

Davis’s research is addressing the fundamental question of how neural networks can support high-level cognitive operations such as general problem solving, planning, reasoning and cognitive control.

Currently, neural network modeling methods are simply not competitive with more traditional symbolic AI for such tasks. Davis has proposed to fix the limitations of neural networks in this regard by creating neural systems that can represent and process symbolic entities as gated attractor states in recurrent neural networks. He is in the process of proving that these ideas can work by creating a purely neurocomputational model that supports learning to carry out tasks by observing how people do them, i.e., so-called imitation learning that is so important in human learning.

Davis is advised by James Reggia, a professor of computer science with joint appointments in UMIACS and in the Department of Neurology at the University of Maryland, Baltimore.

“As a Ph.D. student here, Greg has exemplified academic excellence, and I would characterize him as in the top one percent of graduate students that I have known over the last 40 years,” Reggia says.

Knittel’s research is focused on exploring fairness and scalability in hierarchical clustering.

Clustering, the problem of meaningfully partitioning data into multiple subsets, is ubiquitous; its applications cover a wide range of topics including image recognition, targeted advertising, medical imaging and more. Hierarchical clustering extends this to create a tiered clustering, where the higher-level clusters are subdivided moving down the hierarchy. This is considered stronger than standard clustering because it contains immediately accessible clustering at different levels with varying sizes, and it encodes an evolutionary history of the relationships between data.

Knittel says despite the practicality of hierarchical clustering, important topics like fairness (i.e., removing the presence of systemic bias in algorithmic design) and scalability (i.e., ensuring algorithmic efficiency at large scales) have received little attention. With a focus on these two topics, Knittel researches algorithms motivated by both theoretical guarantees and empirical success.

She is co-advised by John Dickerson, an assistant professor of computer science, and Mohammad T. Hajiaghayi, the Jack and Rita G. Minker Professor of Computer Science.

“Marina is extremely technically talented, driven and has a taste for problems that will both push forward the academic state-of-the-art while simultaneously having impact in the real world,” Hajiaghayi says.