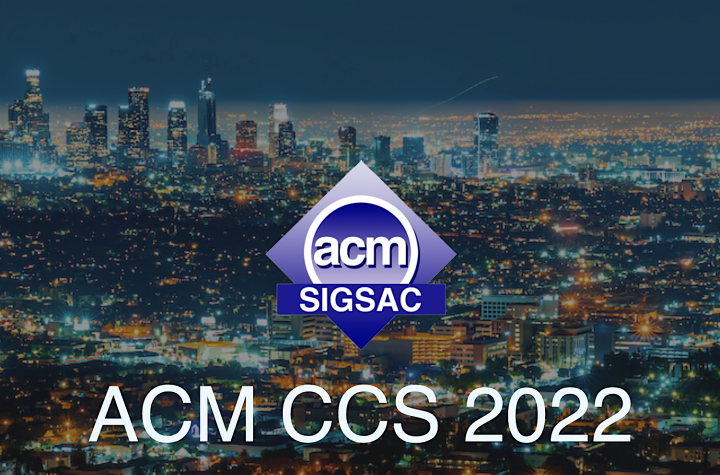 Researchers affiliated with the Maryland Cybersecurity Center (MC2) had six papers accepted to the 2022 Association for Computing Machinery Conference on Computer and Communications Security (ACM CCS), including two that received honorable mention awards.

The annual conference brings together information security researchers, practitioners, developers and users from around the world. It was held this year from November 7–11 in Los Angeles.

“It's great to see MC2 faculty, students and postdocs continue to produce strong work on so many important topics, from the web’s certificate infrastructure to hardware security, and from secure software development to formalizing aspects of blockchain technologies,” says Michelle Mazurek, an associate professor of computer science and director of MC2.

“Hammurabi: A Framework for Pluggable, Logic-Based X.509 Certificate Validation Policies,” one of the papers to receive an honorable mention, introduces a framework that decouples certificate processing mechanism from certificate validation policy.

The researchers demonstrate that they can express the complex policies of the Google Chrome and Mozilla Firefox web browsers in this framework. They confirm the accuracy of the Hammurabi policies by comparing the validation decisions they make with those made by the browsers themselves on more than 10 million certificate chains derived from certificate transparency logs, as well as 100K synthetic chains.

In the paper, the researchers demonstrate the first end-to-end implementation of a successful key recovery attack against FrodoKEM, which was designed as a quantum-resistant public key cryptographic algorithm, using Rowhammer.

Their attack works as follows. First, they launch Rowhammer—a security exploit—to poison FrodoKEM’s KeyGen process. Then, they use a supercomputer to extract private-key material and synthesize this data using a tailored key-recovery algorithm. Finally, any individual FrodoKEM-encrypted session-key can be recovered in around two minutes on a regular laptop.

The paper’s co-author include Dana Dachman-Soled, an associate professor of electrical and computer engineering and core faculty member in MC2; Hunter Kippen, a third-year electrical and computer engineering doctoral student, and researchers from the University of Arkansas, University of Michigan, George Washington University, Georgia Institute of Technology, National Institute of Standards and Technology and the MITRE Corporation.

In addition to their tenured academic appointments, Mazurek, Levin and Dachman-Soled all have appointments in the University of Maryland Institute for Advanced Computer Studies (UMIACS).

The other MC2-affiliated papers presented at the conference were: