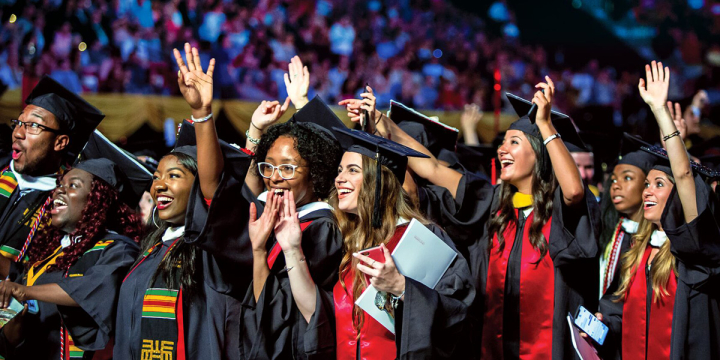 New rankings published in October 2022 place the University of Maryland in the Top 4 for most bachelor’s degrees awarded in computer and information sciences and support services overall and to minority groups.

UMD ranks No. 4 overall (No. 2 among non-online programs) for conferring the most bachelor’s degrees in computer and information sciences and support services, according to The Chronicle of Higher Education. UMD conferred 1,188 degrees between July 1, 2019 and June 30, 2020, and 345 were conferred to women (29%).

“We are proud to provide educational opportunities to so many students who are passionate about computer science and help them launch their successful careers,” said Matthias Zwicker, chair of UMD’s Department of Computer Science. Zwicker also holds the Elizabeth Iribe Chair for Innovation and the Phillip H. and Catherine C. Horvitz Professorship. “Being one of the strongest contributors nationwide in educating the tech workforce, both in terms of quality and quantity, is a huge achievement for our department.”

The department added a new computing cluster to scale up infrastructure for undergraduates in 2022 and launched a new undergraduate immersive media design major and student startup accelerator called the Mokhtarzada Hatchery in 2021.

Also in 2021, UMD was selected as a site for Break Through Tech, a national initiative that works at the intersection of academia and industry to propel more students who identify as women and nonbinary into tech education and, ultimately, tech careers. This effort adds to programming by the Iribe Initiative for Inclusion and Diversity in Computing, which launched in 2019 to expand the Maryland Center for Women in Computing and emphasize inclusion for students of all genders and backgrounds.

In 2019, UMD also opened a 215,600-square-foot facility where computer science students learn in collaborative classrooms and auditoriums, pursue research in specialized labs, create and innovate in fully equipped makerspaces, and engage with one another. The six-floor Brendan Iribe Center for Computer Science and Engineering serves as a hub for technology, collaboration and discovery that offers students unprecedented opportunities to innovate bold new applications for computer science.