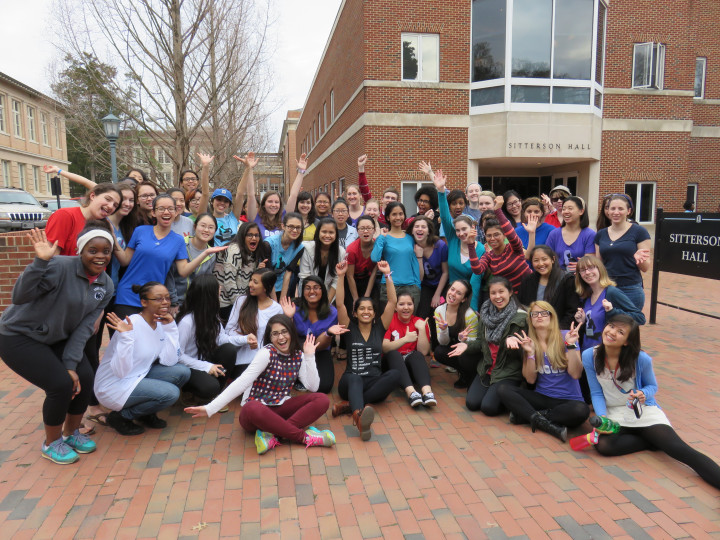 When you think of a hackathon, what image comes to mind? An ambitious group of high school and college women sharing ideas, encouraging each other, and coding their hearts away?

Believe it or not, that is exactly what happened at Pearl Hacks 2015, an all women’s hackathon held at the University of Carolina at Chapel Hill from March 21 to March 22. A total of 51 women from UMD participated in Pearl Hacks, most of them members of the Association of Women in Computing (AWC). They bussed down on Friday afternoon, where they joined other participants from Georgia Tech, Duke, UVA, Rutgers, and even high school students from around the country.

As the participants started getting to know each other, an excited buzz filled the air. For many this was their first hackathon, and they felt comforted being surrounded by so many women at a traditionally male-dominated event. “It was a really empowering environment,” says Nancy Wismer, a UMD sophomore.

On Saturday morning, Pearl Hacks kicked off with an opening ceremony and an inspirational keynote speech by Dona Sarkar, a top-notch Engineering Manager at Microsoft. She confidently took the stage, filling the room with her eloquent voice.

As Sarkar opened up about her past experiences, from failing her operating systems class in college to getting a job offer at Microsoft, many members of the audience empathized with her stories of both failure and success. She also talked about her passion for fashion design, proving that it is possible for computer science majors to have outside hobbies and interests.

Sarker’s talk set the tone for the event, encouraging the participants to be bold and experiment with untested ideas—and thus the hacking began.

For 24 hours, the teams established their hacking spaces, brainstormed ideas, and worked on their projects. Throughout the hackathon, the participants had access to many resources, as well as festive activities to escape from the hackathon’s intellectual tangles. These ranged from education workshops on web development and big data to swing dancing and yoga. Companies and sponsors provided all kinds of hardware for the hackers, and food was constantly available. 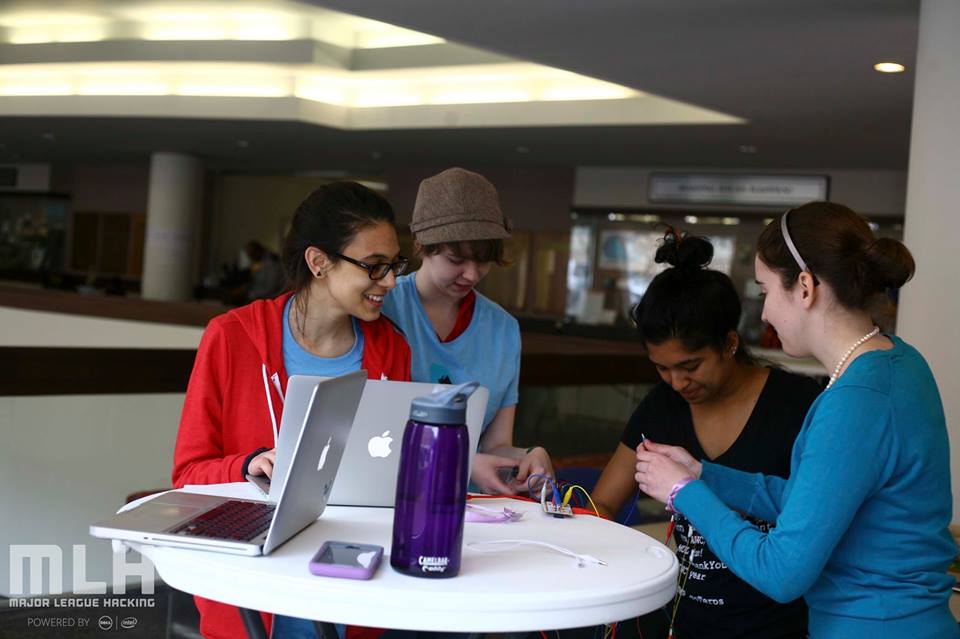 The UMD teams wasted no time in hitting the ground running. One team, consisting of Aboli Kumthekar (senior), Elissa Redmiles (PhD), Charmi Patel (sophomore), and Becca Chapin (freshman), developed a wearable technology called Sexual Assault eMpathy Experience (SAME). When the user touches different parts of a shirt, it represents actions in a virtual simulation, causing the simulation victim to experience a negative emotion or a flashback. The SAME project aims to help the friends and family members of sexual assault victims better understand how the victims feel.

The group came up with the idea through lots of brainstorming and research. “We ended up googling ‘My girlfriend was sexually assaulted what do I do,’” says Kumthekar. “There were lots of web pages [filled with] long boring information, so we wanted to do something a little bit more interactive, more friendly to look at.” 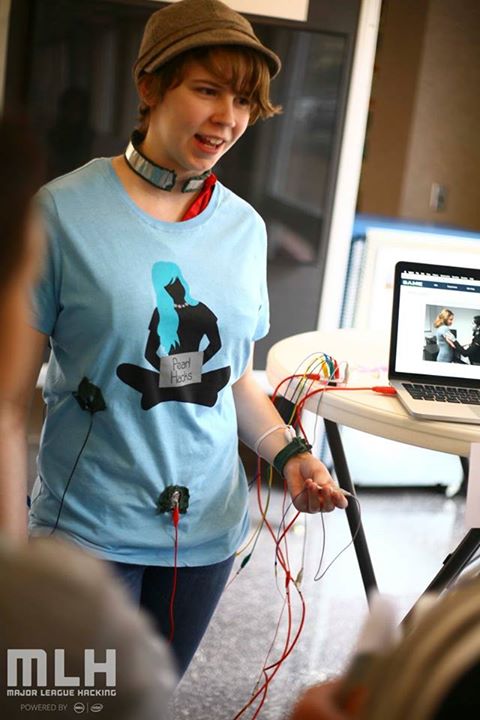 To accomplish this, they rented a MaKey MaKey, a hardware kit that turns any conductible object into a keyboard. “We cut apart one of the catering tins, covered it in fabric, and sewed them onto the shirt because it needed to be conductive,” Kumthekar says. By connecting the shirt to the MaKey MaKey using Alligator Clips, they could translate touches on the shirt into keyboard touches for the simulation.

After many hours of hard work, the hackers were awarded the Best Design/UI Award. SAME was also featured in Charlotte UNC News, where the team gives a short video demo of their project. The shirt is now in the hands of the UMD Human-Computer Interaction Lab.

Overall, the team believes it was a great experience. Everyone in the team contributed, and they believe that their project has potential for promoting empathy and leaving a deeper impact. “It is designed to help people tangibly step into the shoes of a sexual assault victim,” says Redmiles. In the future, the team wants to see the shirt placed in a high school classroom for sexual assault prevention.

Meanwhile in another part of UNC, another UMD team, Spark Chatter, was working on a project also related to sexual assault. However, Margaret Gratian (senior), Catherine Jou (senior), Allie Abad (senior), and Katura Harvey (junior) decided to take it from a different angle.

Through data mining techniques, Spark Chatter developed an interactive website that analyzes the types of conversations taking place on Twitter and how they differ between men and women across the country. “Specifically, we data mined for tweets related to the topics of technology and sexual assault because we felt that these were two topics that men and women really need to be in conversation with each other in order to have progress and positive change,” says Gratian.

Another cool feature of their project was a data visualization map with blue or pink states, indicating if more men or women in that state, respectively, are talking about a specific topic. Not only can users see the difference, but they can also click on a state to find more resources. 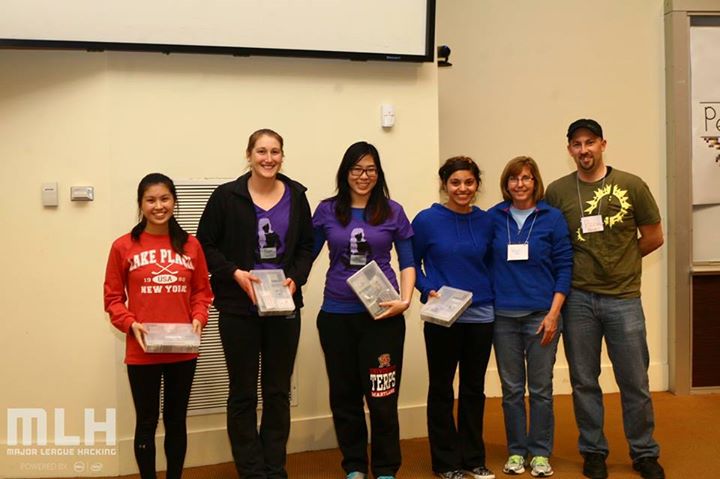 Gratian explains, “For example, if you’re a woman in MD and there aren’t many women in your area talking about tech, you can go to the MD link and find out about events in your area.” Spark Chatter is both descriptive and prescriptive, using eye-catching data displays to connect a user to more resources and ultimately open up more conversations.

In terms of technical execution, the Spark Chatter team used IBM’s Bluemix platform to host the website. Abad and Harvey focused on the back-end, while Jou and Gratian used Javascript, HTML, and D3 to develop the front-end. The group also used Python, Tweepy API, and Alchemy API for data mining and tweet sentiment processing. In the end, Spark Chatter won IBM’s award for using their technology.

“We all helped each other,” says Gratian. “It was a lot of fun working with [my teammates] and we collaborated really well.” For now, users can only search “tech” and “sexual assault” using Spark Chatter’s prototype, but in the future they want to expand so users can search any word.

While a lot of projects targeted social issues, some projects were more light-hearted. For Nancy Wismer and her team, Erica Phlek (sophomore, UMD) and Ashwini Suresh (freshman, University of Texas), fun was the top priority. Their project: a simple Android game. 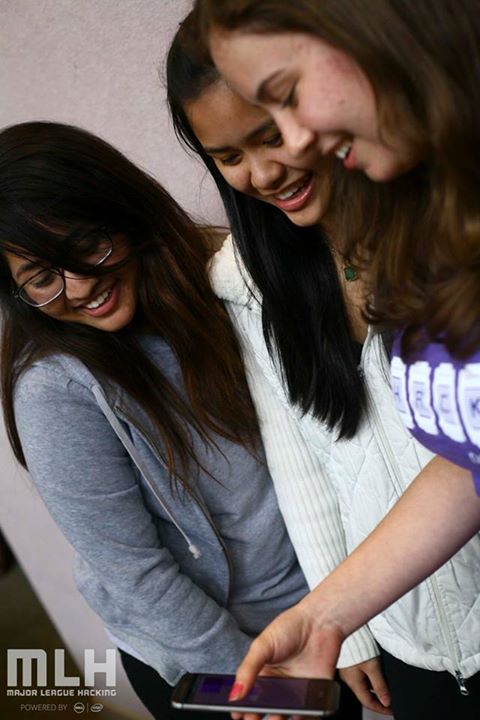 To figure out the graphics, the team attended a workshop that gave the perfect introduction through Javascript. “The [workshop] was great and we were able to create some really fun stuff in a short amount of time,” Wismer says. Ultimately, the team made the game as annoying as possible, since, as Wismer sees it, “annoying, addicting games are all the rage these days.”

The final product was a grid with fifteen invisible squares. Tap all fourteen safe squares while avoiding the single deadly square and you win.  The catch, of course, is that there is no way of knowing which square to avoid. It sounds pointless and frustrating—and it is, really—but Wismer found that didn’t stop anyone from playing again and again. “After playing a couple times most people were determined to win, and played until they did,” Wismer says. “Pearl Hacks was a great experience, and I will continue to go every year that it is held!”

For many of the UMD participants, Pearl Hacks was their first hackathon. Freshmen Katie Wang and Alysha Oswal, who created a website to help people dealing with depression, believe that Pearl Hacks was a solid first experience. “I learned bits and bobs of a couple of new programming languages [and] more innovative ways to think about [technology],” says Wang.

In Oswal’s case, moving beyond the programming assignments are individual work only mantra of introductory computer science was an eye-opener. “I didn't quite understand before how a coding project could be done in a group,” Oswal says. “I think I gained some insight in that respect.”

Pearl Hacks was also the first hackathon for Margaret Gratian, a member of the Spark Chatter team. “It’s easy to feel really alone as a female in tech, especially when you're one of two or three girls in a class, but seeing all these girls together working on projects was really empowering,” Gratian says enthusiastically.

Although veteran hackers had a similar positive experience, they also brought a few other insights to the table. “Originally I wasn’t thinking of going because it was spring break and I wanted to spend time with my cats, but as I read the website I became interested,” says Kumthekar from the SAME team. “I [even] brought a dress with me, which is something I would never ever dream about bringing to a normal hackathon.”

Above all else, Pearl Hacks was about learning, making mistakes, and growing. If you’re interested in attending Pearl Hacks 2016, stay tuned! Hackathons may seem intimidating, but at the end of the day, Pearl Hacks is just an ambitious group of high school and college women sharing ideas, encouraging each other, and coding their hearts away.