The Maryland Center for Women in Computing hosted the NCWIT Aspirations in Computing Awards for high school girls. 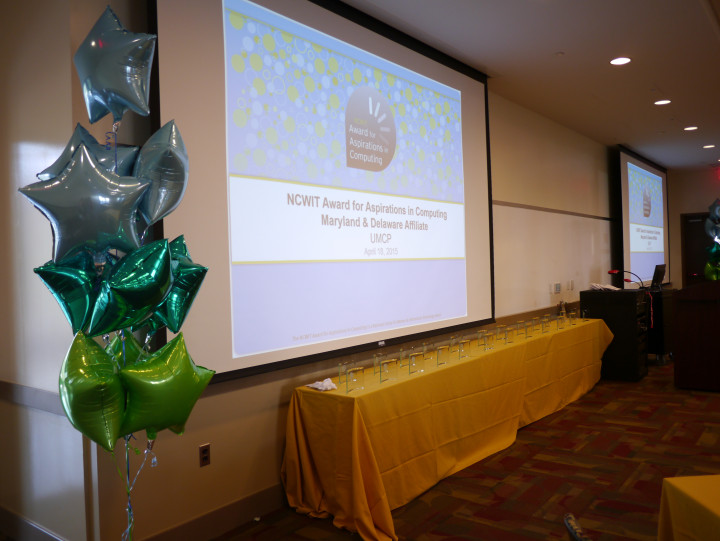 This past Saturday on April 18th, the Maryland Center for Women in Computing hosted the NCWIT Aspirations in Computing Awards for high school girls.  Twenty-four young women with their parents and siblings filled the Multi-Purpose Room of Prince Frederick Hall.  After a quick meet and greet with professionals from Northrop Grumman, the company that sponsored the event, the award winners split from their parents.  Their families stayed in the room to learn about what computer science is, what it means to work in the field, and the stereotypes of computer science.  It was a chance for the parents and siblings of these bright young computer scientists to get a glimpse into the field their daughters will be joining.  Dr. Jan Plane and Loyola University’s Dr. Megan Olsen explained possible pitfalls and the amazing benefits of working in technology not only as a young person right now, but as a young woman in the field.

The award winners filed into the seminar room right next door where they got to mingle and get to know one another.  Cindy Greenwood, the NCWIT Assistant Director from UMBC, got the young women out of their chairs and talking about their lives.  After finding some uncommon commonalities with their fellow winners, the girls sat back down and discussed Computer Science at the college level with a few women in the field.  Megan Gansfuss, a software developer at Northrop Grumman, talked about her experiences after college and working in the field.  Sami Turskey, who won the award when she was in high school and currently attends UMBC, talked about her own school projects and adjusting to college level Computer Science courses.  Kinsey Smith, an ACES student double majoring in Computer Science and Criminal Justice here at UMD, talked about what it was like to not only pursue Computer Science, but another discipline at the same time.  The three also talked generally about how they got interested in the field, and what currently helps them the most in their studies and work.  At the end of the session, Cindy Greenwood asked them why we all wanted more women in Computer Science.

One award winner summed it up quite nicely saying that it was important to increase diversity in the field because of how big technology is in our everyday lives.  "Computer science is so prevalent," she explained.  "Women shouldn't be left behind."  Cindy Greenwood agreed and followed up with her own reasoning: "If a team solving problems doesn't cover a lot of different backgrounds, things will be missed."

Afterwards, the award winners rejoined their parents.  The twenty-four young women were called up one by one and presented a trophy, with their accomplishments displayed.  Some had received high scores on STEM AP exams, others made strides in promoting computer science in their local communities, while even more had won other awards for their work.  The award winners had a large breadth of experience and interests, celebrating the fact that Computer Science is not a homogenous field and that Computer Scientists are as varied a group as any other major, even at the high school level.  Award winners were also given a second trophy for them to take to their schools to be put up in the trophy cases.

At the end of the night, Susan Wilson, Director of Business Development at Northrop Grumman, gave the girls indispensible advice about their future careers and how to achieve their goals.  The most important thing, Susan Wilson explained, was "to show people how you add value to whatever you're applying for."  She spoke of how she went to school back when technology was not acceptable for women, and thus she had to overcome certain obstacles and be more forthright about what she wanted to do.  And that although going to school for engineering and working with code is hard work, "anyone who tells you technology isn't fun isn't doing it right."