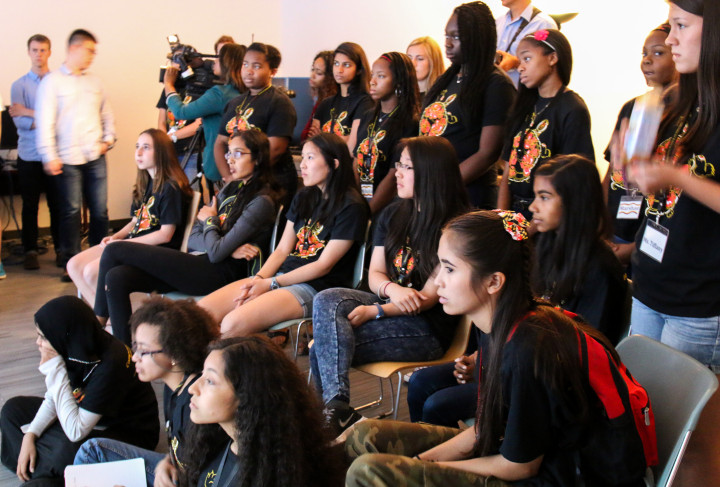 A number of students in the Computer Science Connect Camp run by Dr. Jandelyn Plane presented their final projects on Wednesday, July 1 in the Virtual and Augmented Reality Laboratory (also called the Augmentarium). The camp, also called CompSci Connect, is for middle school students and runs monthly on weekends during the school year and for two weeks during the summer. It will be funded by AFCEA Bethesda for its next five years.

“The purpose of the CompSci Connect program is to show students from populations currently underrepresented how computing 'connects' to everything else and to 'connect' students interested in computing to each other,” writes Dr. Plane, who in addition to leading the program is a Senior Lecturer in the Department of Computer Science and the Director of the Maryland Center for Women in Computing. “Teaching [the students] about augmented and virtual reality is one way to show them how computing can be used to solve real world problems.”

In addition to learning from Dr. Plane, the CompSci Connect students have also been taught by undergraduate and graduate students in the Department of Computer Science. The students presenting Wednesday were members of the camp's “Terp Team”, ranging from rising 8th to 11th graders.

“The students participating in [CompSci Connect] are so much fun to interact with!” writes Professor Samir Khuller, the Elizabeth Stevinson Iribe Chair for Computer Science. “They are sharp, motivated, creative and come in on Maryland Day each year to showcase their work and further inspire other kids.”

The students arrived in the Augmentarium in the morning for an introduction from UMIACS Director of Communications Tom Ventsias and a presentation from Professor, UMIACS Director, and Director of the Graphics and Visual Informatics Laboratory (GVIL) Amitabh Varshney on virtual and augmented reality. Topics of interest were the history of the field, current technologies and applications, and ways in which VR and AR could be used to make a difference in the world. 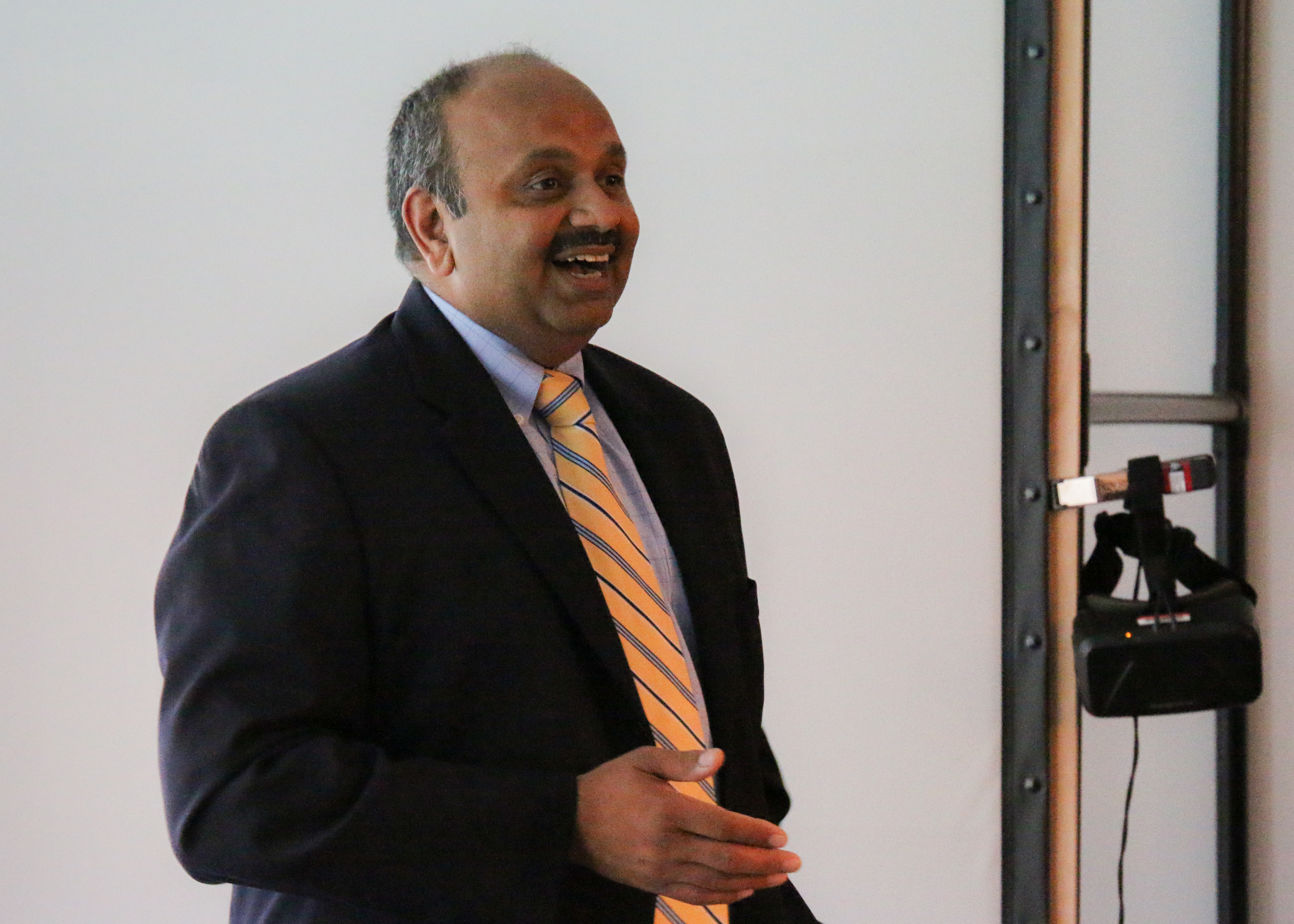 The roles of presenter and audience were flipped shortly after, when two of the students' groups presented their work—a car game and a “space shooter” game, both developed in Unity 3D for the Oculus VR. The students created the game environments and programmed the objects' behaviors themselves during their time at the camp. “...Seeing [their games] on the big screen in the Augmentarium added that extra level of excitement about what they had created,” notes Dr. Plane.

Professor Varshney and his undergraduate and graduate researchers responded with excitement to the CompSci Connect students' work. “I'm impressed!” Professor Varshney noted, smiling. Following their presentations the students got to try out some of the augmentarium's other technology, including a simulation of flying in space and a visualization of E. coli at the molecular level. They also viewed a presentation on augmented environments from Ruofei Du, a graduate student advised by Professor Varshney. 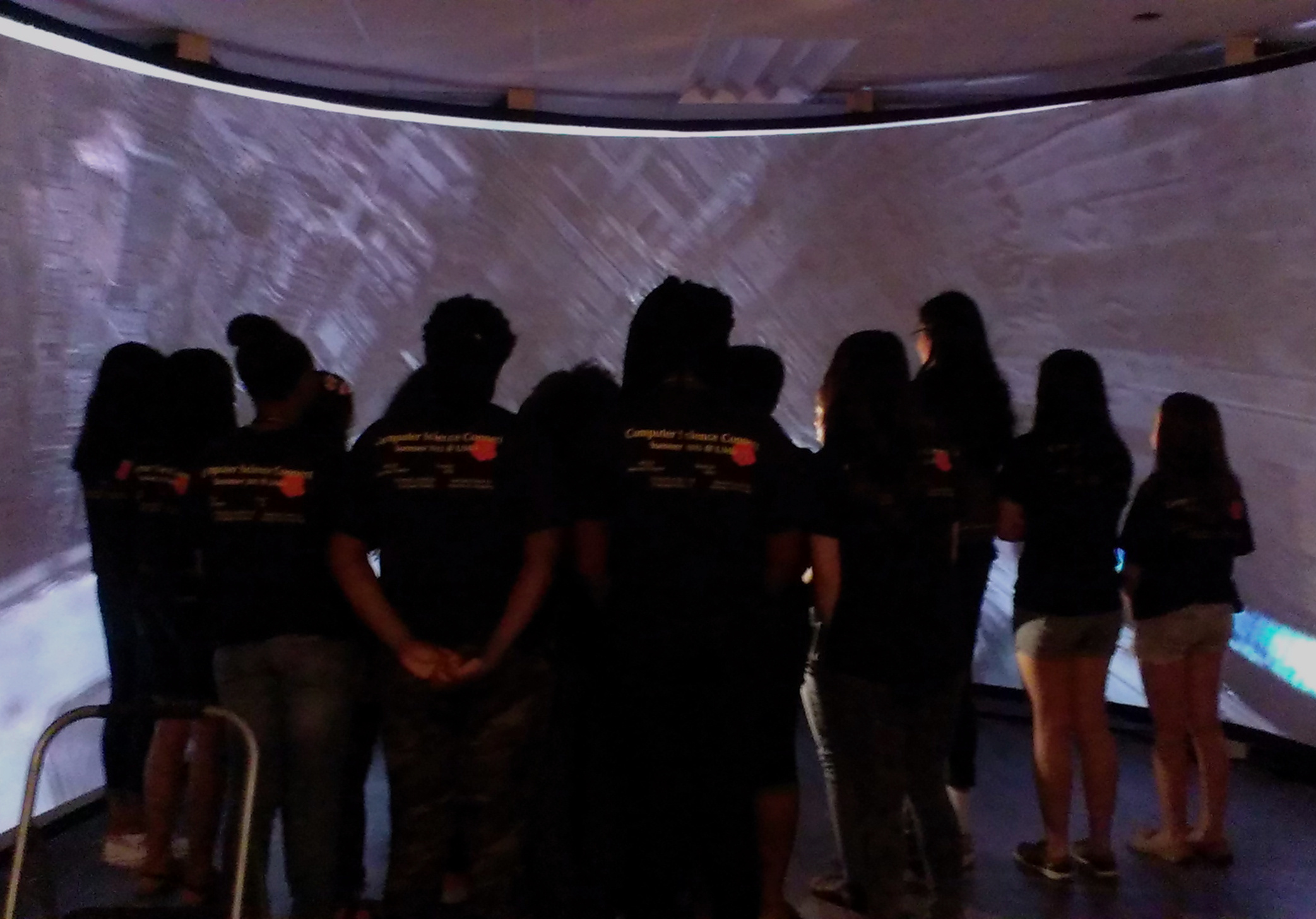 “[Dr. Plane]'s dedication to the program is impressive and absolutely pioneering,” writes Professor Khuller. “We have been providing space and resources to help with this for three years now and the success is spectacular!”