University of Maryland study suggests that a society’s level of mobility influences whether its members treat outsiders as individuals
December 08, 2015 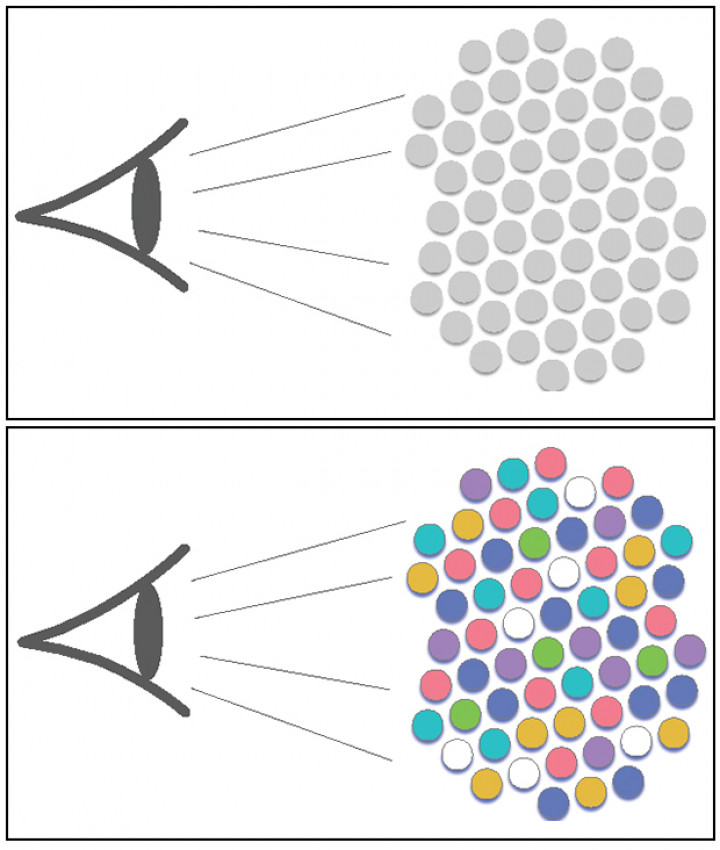 Ethnocentrism results when members of one group view members of another group as undifferentiated and interchangeable (top image). In contrast, increased mobility in a society results in reduced ethnocentric perceptions and behaviors (bottom image). In this scenario, members of a group can respond to differences between individuals in another group. Credit: Dana Nau.

One can’t help but notice that migration is increasing. The trend over the last century has been toward greater mobility for more people around the world. Many people today live in a place different from where they were born, with different social norms and customs.

A new study by University of Maryland researchers points to a surprising byproduct: increased mobility may help people to treat each other as individuals rather than as members of a defined social group. The work suggests that mobility counteracts the tendency of populations to become more ethnocentric—or prone to favor members of their own ethnic, tribal or national group while being hostile to other groups—over time. The study appears online in the journal Nature Scientific Reports on December 8, 2015.

“Our study marks the first time that a computational model of evolutionary game theory has been used to examine whether the well-studied psychological phenomenon of ethnocentrism develops differently with increased mobility,” said Soham De, lead author of the study and a graduate student in computer science at UMD. “The underlying message is very hopeful: ethnocentric behavior is not inevitable, so perhaps there are additional steps that human societies can take to reduce conflict.”

Historically, most group conflicts have been between people who define themselves primarily by the groups to which they belong. Previous psychology research has established that such categorization is natural, with humans classifying others into “in groups” and “out groups.” A common outcome is for individuals to favor those in their own group while being hostile to outsiders. Indeed, many cultural psychology studies have suggested that that this tendency toward ethnocentrism is inevitable in the development of human societies.

The current study supports the idea that ethnocentric behavior is not inevitable, but is affected by structural conditions within a society, including overall levels of mobility.

The team began with a well-established computer model of human behavior based on the tenets of game theory, a concept that economists, political scientists and psychologists use to study patterns of human decision-making. Such collaborations between computer scientists and social scientists have become more common, as the former can use computational models to test theories put forward by the latter.

“Evolutionary game theoretic models can help explain how a society’s characteristics may evolve over time, as individuals change their actions and strategies in order to adapt to their current conditions,” said study co-author Dana Nau, a professor of computer science at UMD with a joint appointment in the UMD Institute for Systems Research. “Although these models are much simpler than real human societies, they can help to tease apart causal relationships and provide support for social science theories.”

By introducing mobility into their model, the researchers dramatically reduced the emergence of ethnocentric behavior. Their results indicated that when societies are more mobile, their actions are more likely to depend on seeing people as individuals, rather than as part of a perceived group. In addition, the findings show that there is less hostility toward other groups in highly mobile places compared with those with low mobility.

Research in cultural psychology suggests that in mobile societies, people strategically adapt to their situation by changing their relationships often, having a broad network of casual acquaintances and being open toward strangers. They are likely to evaluate others based on their individual trustworthiness and worth. But in places where people are not very mobile, opportunities to form new relationships are limited—and ending existing relationships can carry harsh consequences. In these places, maintaining loyalty to one’s own group while keeping a safe distance from other groups is a good adaptive strategy.

“In contexts that are mobile, people are constantly coming and going from different relationships; being open to strangers is presumably adaptive in these circumstances,” said study co-author Michele Gelfand, a professor of psychology at UMD. “On the other hand, in low-mobility contexts, individuals have far fewer opportunities to form new relationships. They get most of their needs met through the group they identify with; in this context, in makes more sense to treat people according to the groups to which they belong.”

The researchers ran their game theoretic model through tens of thousands of iterations, covering various scenarios on UMD’s Deepthought2 supercomputer cluster. In low-mobility scenarios, the researchers found that 75 percent of the population adopted strategies that favored their own group and were hostile to others. When the researchers increased the amount of mobility in the model, the inverse scenario developed, with about 70 percent of the population using strategies that were more dependent on individual behavior. Thus, mobility thwarted the evolutionary dominance of group perception and ethnocentric strategies.

The team then tested their results against real-life data from the U.S. Census Bureau, which provides measures of mobility for all 50 states. Mobility was positively correlated with responses to the question, “I am interested in the cultures of other countries” and negatively correlated with responses to questions related to ethnocentric attitudes. This analysis of census data was consistent with the results from the model.

“It’s always good to test whether what you predict in your model actually happens in real life,” Nau said.

“One characteristic an agent can have in our model is whether they treat another person more as an individual, rather than a member of a particular group,” Gelfand said. “As the level of mobility goes up a bit, they start to need to have interactions with new groups. They do much better in these kinds of circumstances if they treat others as individuals. It becomes adaptive.”

Gelfand also cautioned that because the model is very abstract, it will not apply to every real-world scenario. “But overall, in a mobility context, we start treating people as individuals rather than recognizing them only as a member of a category,” she said.