The five-year agreement will accelerate the development and deployment of safe, effective, and resilient capabilities and technologies that work intelligently and in cooperation with each other and with human actors across multiple environments.
May 26, 2021 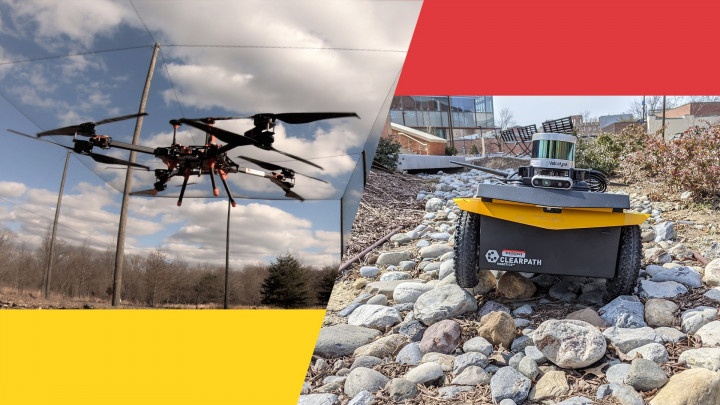 The agreement brings together a large, diverse collaborative of researchers—leveraging the University System of Maryland’s national leadership in engineering, robotics, computer science, operations research, modeling and simulation, and cybersecurity—to drive transformational advances in artificial intelligence (AI) and autonomy. The five-year agreement will accelerate the development and deployment of safe, effective, and resilient capabilities and technologies, from wearable devices to unmanned aircraft, that work intelligently and in cooperation with each other and with human actors across multiple environments.

The robust effort encompasses three areas of research thrusts, each supported by a team of faculty, staff, and students. The new collaboration builds on a more than 25-year research partnership between UMD and ARL in AI, autonomy, and modeling and simulation to spur the development of technologies that reduce human workload and risk in complex environments such as the battlefield and search-and-rescue operations.

“This extensive collaboration convenes a critical mass of expertise within the state, at the University of Maryland, and across the entire University System of Maryland,” said Laurie Locascio, vice president for research at UMD. “It’s a very exciting alliance that leverages the university’s decades-long research partnerships with ARL to forge a critical pipeline for research innovation and commercialization in the booming ecosystem of robotics, AI, and autonomy.”

“This is a big partnership with an ambitious vision: we want to change the world by quickly getting AI and autonomy into the hands of the people who need it,” said Derek Paley, lead researcher on the agreement, UMD professor, and director of the Maryland Robotics Center. “No matter how autonomous we think a system is, a human operator will interface with it at some level. The goal is to migrate the dangerous, dirty, and dull work to the autonomous platform.”

The cooperative agreement will enable substantial collaborations between UMD, UMBC, and ARL researchers and leverage unique university and federal assets and facilities to accelerate advancements in AI and autonomy for mobile and connected platforms in multiple operating domains. For example, it will grant the UMD and UMBC teams access to ARL’s Robotics Research Collaborative Campus (R2C2), which includes a one-of-a-kind, 200-acre, reconfigurable, multiple-terrain outdoor testing laboratory just north of Baltimore for scalable AI, autonomy, and robotics research.

“In an era of rapidly increasing strategic threats driven in large part by global access to science and technology, talent, and resources, the nation that can best operationalize science and do it quickly will have game-changing competitive advantages over their adversaries,” said Karl Kappra, director of the U.S. Army Combat Capabilities Development Command (DEVCOM) ARL’s Futures Division. “ARL is pleased to be initiating this new enterprise with the University of Maryland, College Park and University of Maryland, Baltimore County to engage their talented staff and students to provide the foundations for new artificial intelligence and autonomy capabilities to  improve the survivability and effectiveness of America’s armed forces. This collaboration will address the Army’s unique challenges and with access to the entire University System of Maryland, it will provide opportunities for new technology insertions while supporting the continued development of our nation’s STEM community.”

In the face of unknown challenges, partnering with intelligent systems could be one of our greatest assets: in search-and-rescue missions after a catastrophic natural disaster, for example, where establishing risk and response is both urgently needed and assuredly dangerous. These systems (which include networked sensors, wearables, and other smart platforms including robots) are also massively complex; developing, testing, and fielding them is time-consuming, costly, and error-prone work. The current process involves unsustainable amounts of human labor, custom tool development, machine-specific integration, one-off component acquisition, manual testing and debugging, and more.

To make significant advances in AI and autonomy technologies able to overcome these challenges, the research team will harness the interdisciplinary expertise and resources of UMD, UMBC, and ARL to develop shared, standard infrastructure for developing and testing collaborative autonomy—including a “virtual proving ground” that models and simulates existing facilities to enable a wide range of interactions between virtual and real-world actors. This broad resource for the research community will overcome the field’s lack of shared standard infrastructure, as well as poor interoperability between existing tools, models, and software.

“Currently, research teams are building their own simulation testbeds to evaluate their own algorithms and systems, which increases cost and delays development of significant innovations,” said Jeffrey Herrmann, co-lead researcher on the agreement and UMD professor. “This collaboration will plan and develop a consistent modeling and simulation infrastructure that will include libraries of simulation models and tools for building and running them.”

As part of another major research thrust, the team will design novel approaches to ensuring closer and more trusted human–machine teaming and interaction. As one example, the team says this work could bolster technologies such as self-driving vehicles or mobile robots, which combine computer vision and remote sensing, robotics planning and control, and other advanced specialties to navigate complex terrains and unstructured environments.

“These are very difficult topics that require extensive but diverse expertise. This research and collaboration could be the glue to bring together the amazing students and faculty across UMD’s campus doing exceptional work in AI and autonomy,” said Dinesh Manocha, co-lead researcher on the agreement and UMD professor. “A five-year partnership that maximizes the complementary specializations of UMD, UMBC, and ARL will give us a window to rethink some of these problems from the ground up and possibly develop next-generation technologies for AI, robotics, and autonomy.”

The research team also will draw on the expertise of domain scientists, data scientists, and cyberinfrastructure experts harnessing the explosion of available big data to drive novel discovery. They will develop solutions for AI-based networking, sensing, and edge computing—which brings data storage and computation closer to a location—for the so-called “Internet of Battlefield Things,” which connects humans with smart technology both on and off the battlefield. In particular, the team will work on strengthening the decision-making abilities of Army AI technology to meet the demands of today’s national defense.

“To make a big impact in the research space, you need long-term, multi-institutional partnerships and collaborations. Working with the University of Maryland, College Park and the Army Research Lab will allow UMBC to collectively advance AI in the military space; we anticipate these technologies will also have civilian use and have a larger societal benefit,” said Aryya Gangopadhyay, co-lead researcher and professor at UMBC.

The principal investigators for this agreement are:

The cooperative agreement includes additional investigators from UMD and UMBC representing a myriad of units and expertise—including, but not limited to, UMD’s A. James Clark School of Engineering; College of Computer, Mathematical, and Natural Sciences; College of Information Studies; Maryland Technology Enterprise Institute (Mtech); and Applied Research Laboratory for Intelligence and Security (ARLIS).