Ming Lin Elected Fellow of the National Academy of Inventors

Lin is a noted innovator in virtual reality, computer graphics and robotics.
December 08, 2021 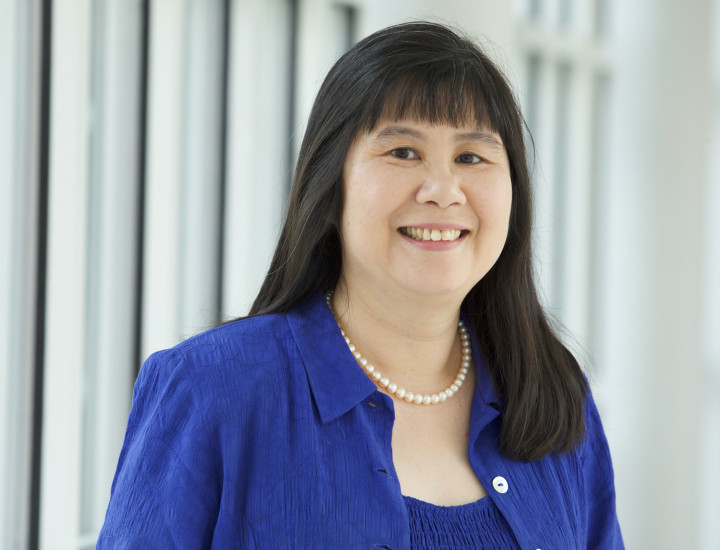 The University of Maryland’s Ming Lin has been elected Fellow by the National Academy of Inventors (NAI), joining the ranks of some of the nation’s most prestigious and creative academic inventors.

The NAI Fellows Program “highlights academic inventors who have demonstrated a spirit of innovation in creating or facilitating outstanding inventions that have made a tangible impact on the quality of life, economic development and the welfare of society. Election to NAI Fellow is the highest professional distinction accorded solely to academic inventors.”

“I am very honored to be elected as a fellow of the National Academy of Inventors this year. We’ve constantly been working on scientific problems where the solutions will have considerable social impact,” Lin said. “That’s important for me—I am hoping through research, teaching and advising that I can make some difference.”

Lin—a Distinguished University Professor of Computer Science with joint appointments in the University of Maryland Institute for Advanced Computer Studies and the Department of Electrical and Computer Engineering—was recognized for her contributions in virtual reality, computer graphics and robotics.

Her research focuses on multimodal interaction, physically based animations and simulations, as well as algorithmic robotics and their use in physical and virtual environments. Her work has extensive applications in medical simulations, cancer screening, urban computing, as well as supporting city-scale planning, human-centric computing, intelligent transportation and traffic management.

“Given Ming Lin’s impressive impact on the fields of computer graphics, computer animation, extended reality and robotics, being elected NAI Fellow is a much-deserved recognition of her phenomenal work,” said Matthias Zwicker, chair of UMD’s Department of Computer Science.

Lin holds five patents in physics-based sound synthesis and propagation, reconstruction of garments directly from photographs, and estimation of tissues properties using images for cancer detection and diagnosis, with her students and collaborators at the University of North Carolina and Microsoft.

Since becoming an Amazon Scholar in 2020, she filed a patent with collaborators there on 3D garment draping prediction using semi-supervisory learning with training data from 3D cloth simulation. Amazon used this work to launch the first real-time physics-inspired, learning-based, fit-accurate 3D virtual try-on technology in 2021.

Under her leadership, Lin’s research group released more than 15 copyrighted software systems that have been downloaded over 2 million times freely for research and education. They have been licensed to more than 60 companies (including several Fortune 500 companies) and integrated with popular robotics middleware suites.

She also co-founded the 3D audio startup Impulsonic, which was acquired by Valve Software. The startup’s Phonon sound rendering library is available as Valve’s open-source Steam Audio and has been adopted in virtual reality applications and multiple game engines. Other companies have also licensed and integrated Lin’s research into games (e.g., Crackdown 2) and virtual reality engines as part of Project Triton.

In her research, Lin has used virtual and augmented reality to better predict vehicle collisions and improve traffic control, an issue that promises new challenges as more autonomous vehicles take to the road. One of her projects, the Road Network, is a library of methods for creating a 3D model of a large-scale road network that can be used for real-time traffic simulation, interactive visualization of a virtual world and autonomous vehicle navigation. This information can be used to make broader decisions about safety, policy and highway construction.

Lin also uses virtual and augmented reality to improve health care. In 2016, one of Lin's research teams showed how using medical images could help to more accurately diagnose and treat prostate cancer in individual patients. By reconstructing 3D geometry from sets of multiple-view images and combining the findings with patient data, such as age and family history, the team determined a likely prognosis and a more timely diagnosis and treatment for cancer. The virtual reality images can also be used for virtual surgery, which lets surgeons practice and experiment on 3D augmented reality objects without risk to a patient.

Lin has authored or co-authored more than 300 refereed publications. She has also authored or co-edited five books and 18 book chapters. She is among the top 20 most cited women in computer science and electronics in the world, according to Guide2Research.

She joins a 2021 Fellow class that hails from 116 research universities and governmental and nonprofit research institutes worldwide. They collectively hold more than 4,800 issued U.S. patents. Among the new class of Fellows are 33 members of the National Academies of Sciences, Engineering, and Medicine, and three Nobel Laureates, as well as other honors and distinctions.

To date, NAI Fellows hold more than 48,000 issued U.S. patents, which have generated over 13,000 licensed technologies and companies, and created more than one million jobs. In addition, over $3 trillion in revenue has been generated based on NAI Fellow discoveries.