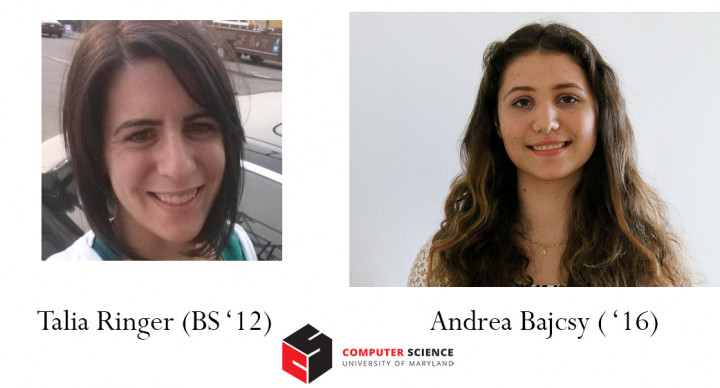 On March 29, 2016, the National Science Foundation (NSF) announced that Senior Andrea Bajcsy and Alumna Talia Ringer were awarded NSF Graduate Fellowships. This year the NSF made 2,000 award offers after receiving 17,000 applications.  Both Bajcsy and Ringer will be using their awards towards PhDs in computer science.  Ringer is currently a first year PhD student at University of Washington, and Bajcsy is still in the process of choosing a university.

When asked about both fellowship winners, Professor Samir Khuller, Elizabeth Iribe Stevinson Chair of Computer Science said, “Talia Ringer always struck me as a thoughtful, brilliant, and deep thinker. Her innate curiosity and energy is so evident, that I knew right away that graduate school was the right place for her. I look forward to even greater things from her that are surely coming.”  About Andrea Bajcsy he said, “Listening to her talk about her work on robotics, made me feel as though I should change fields myself!  She is so full of brilliance, energy, and poise, and it was a pleasure to serve on panel about research and graduate school with her.”

Talia Ringer is first-year PhD student in computer science at the University of Washington Programming Languages and Software Engineering lab. At UW, she works with Professor Franzi Roesner and Professor Dan Grossman on ensuring that phone applications access resources in a way that is consistent with user expectations. She graduate from the University of Maryland with a double major in computer science and mathematics in 2012.  After graduation, she worked as a Software Development Engineer at Amazon in Seattle, Washington.  At the start of this academic year, she began serving as a mentor in the TUNE house, a living and learning community for women studying computer science at the University of Washington. This summer, she’ll be interning with a formal methods research group at Amazon.

Andrea Bajcsy is a graduating senior majoring in computer science, and after she recently visited many graduate schools, she returned home to work with her Gemstone Honors Program Team to finish writing their collective thesis. Bajcsy has been doing research in computer science for most of her career here. She started with Professor David Jacobs of computer science and the University of Maryland Institute of Advanced Computer Studies (UMIACS), and she is ending her research career here with Professor Yiannis Aloimonos of computer science, the Autonomy, Robotics, and Cognition (ARC) Lab, and also of UMIACS. She has recently been awarded honorable mention in the CRA Undergraduate Research Awards. She has also been an active ambassador for both the CS Department as well as the the College of Computer, Math, and Natural Sciences.

When asked about her experience in computer science at the university, Bajcsy said, “To me, computer science has always been about analyzing and solving complex real-world problems. Through the core classes, electives, and research opportunities offered by the UMD CS Program, I have been able to explore both the practical and theoretical challenges of applying computational thinking to problems in robotics, computer vision, biology, and human-computer interaction.” She continued, “Ultimately, being able to assist people in their perception and understanding of the world through robotics and computer vision has been a driving force behind my passion for computer science. I have been able to work on related problems with the fantastic faculty at UMD, from my first on-campus research experience with Dr. David Jacobs on quantifying visual entropy to my current work on collaborative, vision-based robotic homing with Dr. Yiannis Aloimonos.”

About her experiences at the University of Maryland, Talia Ringer said, “Maryland always encouraged me to push my boundaries. When I started undergrad, I had never written a program before. I took the computer science supporting sequence for my math major. It was difficult at first, but I grew to love it, so I picked it up as a second major. Even then, I tried to stay as theoretical as possible. My compilers class senior year changed my trajectory. It was the most interesting course I took. Thanks to the breadth of classes I had access to, I found opportunities I'd had no idea had even existed.”   Professor Jeff Foster taught Ringer in the 400-level compilers course (CMSC430) and he said, “When Talia took my class, she really stood out for her deep intellectual curiosity and drive. I'm thrilled that she won an NSF Fellowship, and I'm looking forward to more great things in the future from her!”