Baxters are low cost humanoid robots meant for adaptable manufacturing purposes by using long nimble arms and a suite of visual and tactile sen- sors. At the University of Maryland, re- searchers are exploring computer vision, machine learning, and artificial intelligence by training the Baxters to pour water into a moving jar, learn to cook by watching YouTube, and work with other robots. 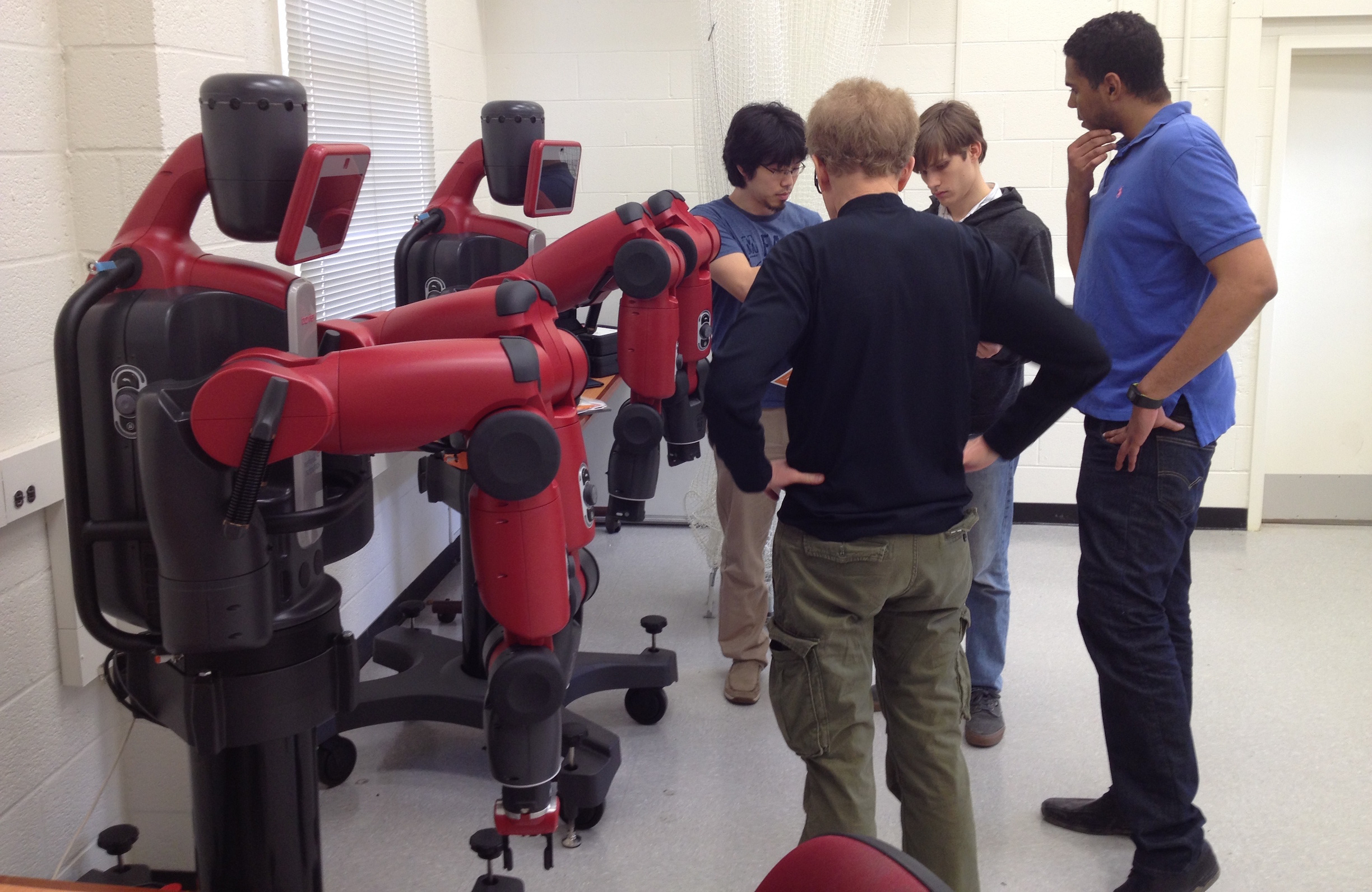 In April 2014, researchers at the University of Maryland acquired two Baxter Intera 3 humanoid robots manufactured by Rethink Robotics [1]. Baxter robots are well known for their use in micro-manufacturing as they are specially de- signed for repeated grasping and moving tasks in a stationary position. While a Baxter’s multi- dimensional range of motion is important, What makes them especially interesting is their adaptability. Baxter robots are trained – not programmed – on work sites. Human workers move the Baxters incredibly flexible robotic arms to show Baxter how to do a particular task. This ability, combined with Baxter’s powerful onboard processing, a suite of sensors, and smooth operat- ing mechanisms makes Baxter ideal for research. In Computer Science, research groups have already begun to explore computer vision, ma- chine learning, and artificial intelligence within a robotic context. Three research groups the Computer Vision Labratory (CFAR), the Metacognitive Lab (MCL), and the Maryland Robotics Center have been cooperating to produce practi- cal results from their individual theoretical fields. Simple tasks like picking up utensils and stirring bowls, pouring water in a moving container, and building structures from blocks have been quickly achieved thanks to this collaboration. By studying the difficulties involved in teaching Baxter to perform these tasks, the research groups hope to solve larger theoretical challenges.

The primary research goal of the Metacognition Lab (MCL) at University of Maryland is to create an enduring artificial agent one which persists over time, learns from its mistakes, interacts with the environment, and constantly acquires new knowledge. An agent of this kind specifically requires metacognition thinking about thinking to analyze its cognitive processes and to adapt how it thinks to prevent future failures. It primarily does this by attempting to understand anomalies in reasoning, asking itself ”what went wrong?”. An enduring agent requires the architectural integration or unification of several components including vision, language processing, reasoning, a knowledge base, goals, and a method of interacting with the world. Using the Baxter platform, the MCL group hopes to put together multi-agent or mixed initiative systems. Professor Don Perlis and MCL are pursuing more direct artificial intelligence research using the Baxter as a physical realization of their work. One example is the BaxnBuzz project which hopes to create a multi-agent system of the immobile Baxter with a Parrot AR quadcopter. The quadcopter will be used to extend Baxters line of sight and help the Baxter solve problems such as locating a dropped item. The group is also researching mixed-initiative systems that have both a human and the Baxter robot participating in a single scenario. For example, the group is currently exploring a construction domain where a human foreman instructs the Baxter using nat- ural language to build a structure using blocks or other building materials. 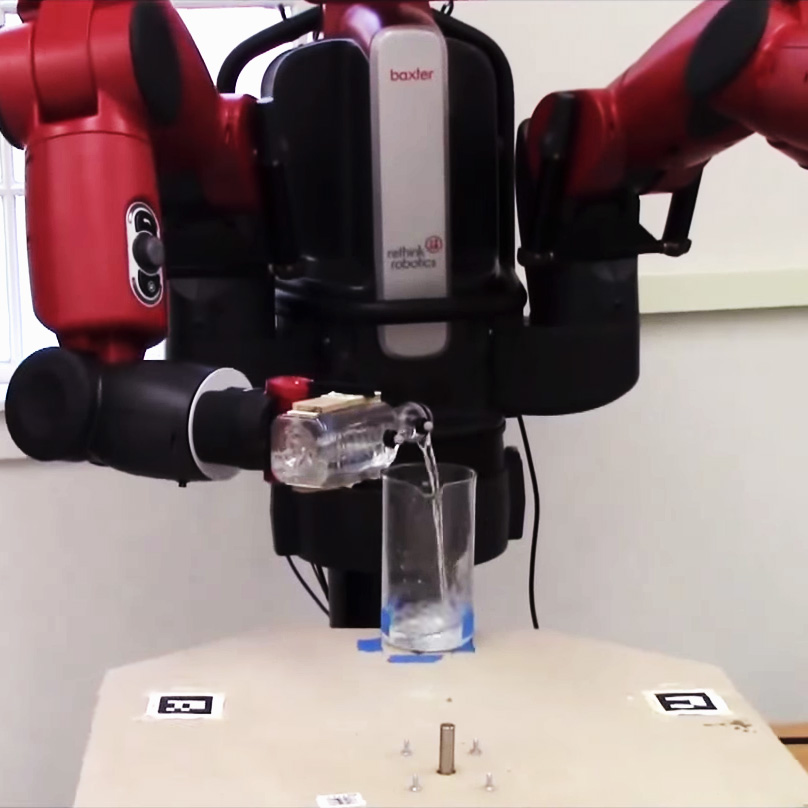 Human beings, when learning to cook, may watch others with cooking experience and mimic their actions. With the advent of YouTube and other video-sharing websites, there are significant amounts of training data available; perhaps a robot can learn to cook by watching YouTube videos and mimicking actions. A group led by Professor Yiannis Aloimonos has developed a visual learning system to teach a Baxter robot to cook by watching YouTube [3]. The team approached the problem from two levels: first a low-level visual system which recognizes objects, hands, and types of manipulations from video, and second a high-level action system which translates the information from the video into actions to be performed by the robot. This system allowed them to use unconstrained YouTube videos as their data source. Much like the push in virtual reality to be able to generate rendered models of real-world environments, the ability to train intelligent systems with real-world sensory input is an important goal for artificial intelligence research.

Professor James Reggia and his group in the Maryland Robotics Center focus on developing imitation learning approaches for motion. In a dynamic fluid pouring task, humans to train a Baxter robot to learn by observing errors made by humans and modeling how humans recover from failed action [2]. Using a supervised model of failure-to-success transitions and imitation learning, the group showed that a robot can successfully perform the same task under different vari- ations and conditions without a sophisticated planning system. By restricting a set of task parameters, such as pouring speed, the implementation of their imitation learning approach is able to succeed at this dynamic pouring task.

The collaboration of vision, robotics, and AI with practical applications using the Baxter robot is allowing research groups to understand visual scenes more thoroughly and to act upon it. The Baxter’s unique hardware and programming interface has provided smaller startup costs and reduced the barrier of entry for groups who traditionally don’t use robotics platforms in their work. Because of this work, we expect to see robotic behaviors that mimick and learn from humans to do chores or follow directions without external programming. The potential for robots to learn much faster, at much lower cost and share that knowledge with other robots is a significant step towards developing technologies that could have benefits in areas such as military repair and logistics, smart manufacturing environments and completely automated warehouses. For videos showing the Baxter at work, please see:http://ter.ps/8i9 and http://ter.ps/8ia.