Moderate to severe diarrhea continues to be a deadly disease, especially for children in low-income countries. Meanwhile, the pathogens causing the condition are still not entirely known. Teams of researchers are using new biological and analytical techniques to look for previously unknown sources of the illness. 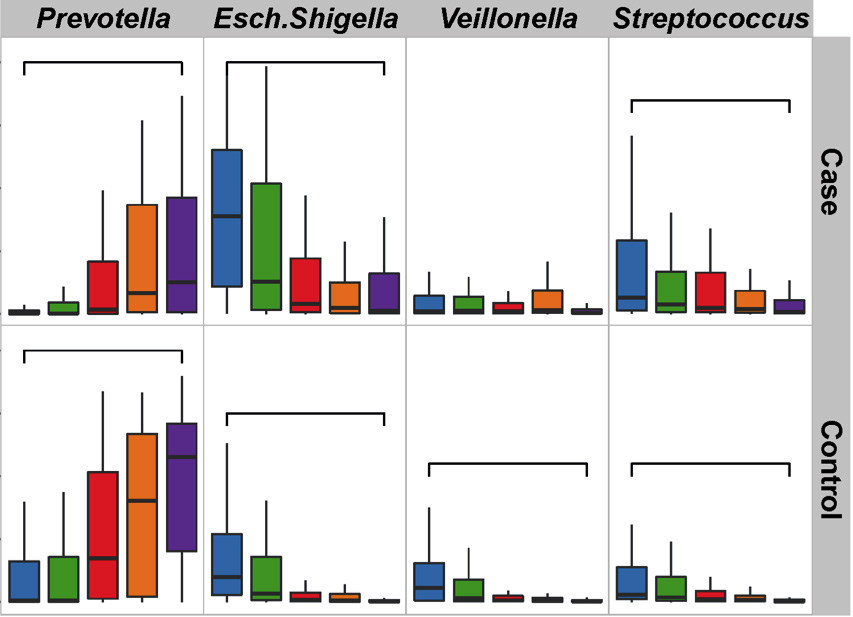 Diarrhea has long plagued human societies. Sadly, diarrheal diseases continue to be a major cause of death in infants and young children. Worldwide, it is estimated that 15% of deaths of children under ve each year can be attributed to diarrheal diseases, while the number rises to as high as 25% in Africa and 31% in South East Asia. Clinical tests focus on more than two dozen possible pathogens. Yet we still don't know if these are the only pathogens that cause diarrhea. In a recent report by the Global Enteric Multicenter Study (GEMS) [2], approximately 60% of moderate to severe diarrhea (MSD) cases had no known pathogen identied, suggesting that future study should apply new diagnostic methods and focus on unknown pathogens and/or the interaction between pathogens and the gut bacteria. Recently, a team of researchers from the US, UK, Gambia, Bangladesh, Kenya and Mali went looking for those unknown pathogens hidden in the genetic information of participants in the GEMS study. Mihai Pop1 of the University of Maryland was the lead author of the article summarizing their ndings in Genome Biology, 2014. In [5], Pop et al. use gene sequencing to reveal fecal microbiotas of the intestine.

Using recently-developed techniques for retrieving and processing large amounts of genetic information, the team compared fecal microbiota composition of children under 59 months of age that have been diagnosed with moderate to severe diarrhea (MSD) and the fecal microbiota composition of diarrhea-free controls. Their study includes 992 children from four low-income countries in West and East Africa, and Southeast Asia (Table 1). Their analysis, testing for positive correlation with MSD, pointed to a new set of bacteria that are not currently considered important diarrhea-causing pathogens [2]. These include Escherichia/Shigella, and Granulicatella species, and Streptococcus mitis/pneumoniae groups. Another key observation from their analysis was the shifting diversity of microbiota in those suering from MSD compared to those that are healthy and as children grow older. The healthy gut microbiota in infants have comparatively low overall diversity and a relatively high proportion of facultatively anaerobic organisms which can make energy by aerobic respiration, anaerobic respiration, and fermentation (e.g., the Escherichia/Shigella group)2. In older children however, the dominant proportion of these organisms is reduced/replaced by a corresponding increase in overall diversity. It is also associated with a particularly noticeable increase in the proportional abundance of the bacterial genus Prevotella, which is an obligate anaerobe { an organism which dies in the presence of oxygen3. In both cases and controls, there tend to be distinct negative correlations between facultative anaerobic and obligate anaerobic lineages. Figure 1 shows correlations found in the analysis revealing the disproportionate presence of Esch.Shigella and Sterptococcus in MSD cases. It also reveals high levels of Provotella among those without MSD. This nding suggests that Prevotella may have probiotic qualities, leading to new preventative measures for MSD that could be as simple as a change in diet. The authors of the study are cautious to point out that signicant variations exist among genera and types of microorganisms by both study site and childs age, and that their ndings { which are correlative, not causative { must be conrmed experimentally. 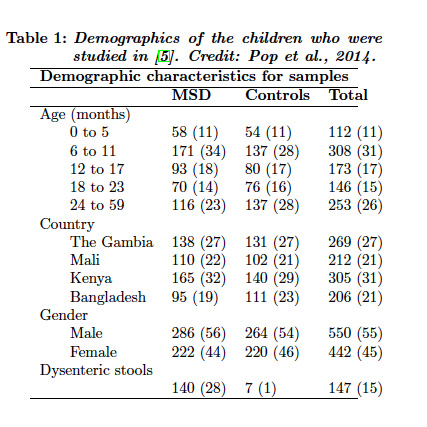 However, several subsequent epidemiological and molecular analyses are already helping to validate their ndings. Follow-up experimental work showed that Lactobacillus organisms indeed reduce the chance of disease due to Shigella [3]. Studies in cell culture showed that indeed Serratia harm intestinal cells [4]. Finally, a recent review supports the idea that members of the Streptococcus genus may cause diarrhea [1].