We live in a connected world. As of 2014, 72% of American adults have a profile on at least one social networking site [1]. Performance feedback devices, including the Garmin GPS watch, fitbit, and Nike+, coupled with exercise based social networks, such as MapMyRun and Strava, have created a growing online social community for runners and cyclists; however, the exercise itself is still performed individually. When compared to individual exercise, exercising as a group has been shown to provide a number of benefits including increased enjoyment and intensity.

In order to promote group exercise, researchers from the Computer Science Department of the University of Maryland have designed smart, wearable athletic clothing that displays your running performance, such as pace and total distance run. Led by Dr. Jon Froehlich, the group designed Social Fabric Fitness, or SFF, in order to increase performance awareness for group fitness.

The researchers built SFF with three main components wearable fabric, builtin display hardware, and a smartphone application and an optional wireless heart rate monitor. They created the smartphone application as a collaboration with RunKeeper, an existing fitness tracking application, which was enhanced to broadcast performance information, such as pace, duration, and distance. This data is wirelessly transmitted via bluetooth to the embedded display hardware. The result is a lightweight, comfortable display that is instantly updated with the runner’s current performance information (shown to the right).

While designing the system, the researchers tested the display on a number of runners in different scenarios ranging from group runs to road races. They found that the system increased enjoyment, as well as motivation, performance, and group cohesiveness. One runner said that the display, “motivated me to go faster than the pace displayed,” and another said, “it made me more aware of our pacing and kept me more focused on the run itself.” About 65% of the participants agreed that SFF motivated them to run faster than the group pace, and 90% of the participants wanted to wear the SFF again. 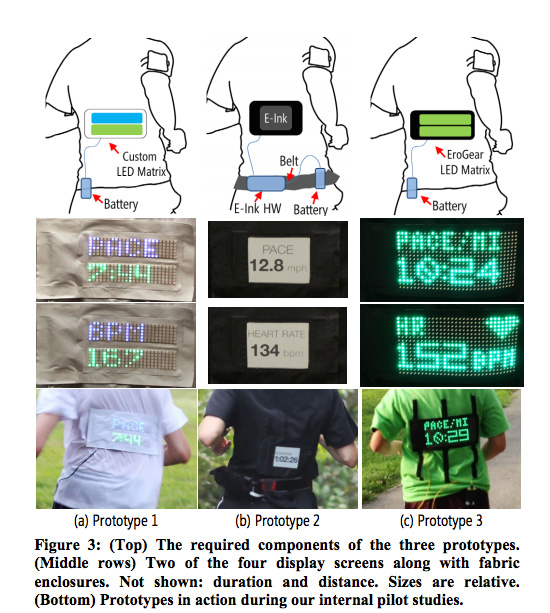 SFF has a lot of potential in the exercise world. The research group specifically mentions pace leaders, which attempt to keep running groups at particular goal paces in larger races. Spectators could also benefit from runners wearing SFF. Allowing runners to opt-in to SFF during a marathon, for example, would increase spectator engagement by providing them with more insight into the participants and their performance during the race. Other sports could benefit from the group accountability aspect as well. Cycling is an obvious next step, but existing social exercise groups like crossfit would also likely be receptive to this technology.