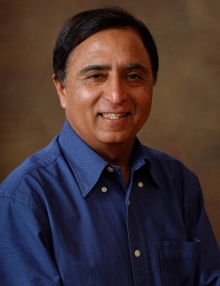 Narendra Ahuja received his Ph.D. degree in computer science from the University of Maryland in 1979. During that year, he joined the University of Illinois at Urbana-Champaign as Assistant Professor where he is currently Donald Biggar Willet Professor in the Department of Electrical and Computer Engineering, the Beckman Institute, and the Coordinated Science Laboratory. His current research emphasizes integrated use of multiple image sources of scene information to construct three-dimensional and other descriptions of scenes, the use of integrated image analysis for realistic image synthesis, sensors for computer vision, extraction and representation of spatial structure (in images and video), and use of the results of image analysis for a variety of applications including visual communication, image manipulation, robotics, and scene navigation.

Ahuja has co-authored the books Pattern Models (Wiley, 1983), Motion and Structure from Image Sequences (Springer-Verlag, 1992), Face and Gesture Recognition (Kluwer, 2001), and co-edited the book Advances in Image Understanding (IEEE Press, 1996). He is a fellow of IEEE, American Association for Artificial Intelligence, International Association for Pattern Recognition, Association for Computing Machinery, American Association for the Advancement of Science, and International Society for Optical Engineering. He is on the editorial boards of the journals IEEE Transactions on Pattern Analysis and Machine Intelligence, Computer Vision, Graphics, and Image Processing. He is also on the boards for Journal of Mathematical Imaging and Vision, Journal of Pattern Analysis and Applications, Int. Journal of Imaging Systems and Technology, IEE Japan Transactions on Electrical and Electronic Engineering, and Journal of Information Science and Technology. He was also a guest coeditor of the Artificial Intelligence Journal's special issue on vision. In 1999 he received the Emanuel R. Piore Award of IEEE (Institute of Electrical and Electronics Engineers).

His paper on integrated formulation of active stereo made the first integrated use of the distinct visual cues of stereo, focus, zoom and camera movements for 3D scene reconstruction. He built one of the first two active eyes-neck-body, verge-focus-zoom stereo vision systems. Such active systems became the bases of commercial products by several companies.

In 1992, he invented the omnifocus camera. Since then, over 15 new major types of special purpose cameras have been introduced by computer vision researchers worldwide, including several by him. Two of his cameras are being commercialized by his company Vision Technology.

Ahuja introduced the notion of segmentation tree in computer vision - a structure capturing all segmentations instead of a single segmentation. This, in conjunction with a statistical physics-inspired transform he proposed, has lead to the most complete and accurate solution to the image segmentation problem.

His paper on integrating concepts from information theory, signal processing and computer vision for error-free wireless video transmission and video-on-demand received the 2006 Best Paper Award from the IEEE Transactions on Multimedia.

His algorithms have been used in systems developed by Advanced Technology, CMC, Honeywell and Westinghouse.