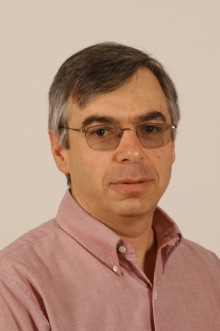 Shmuel Peleg received his Ph.D. from the University of Maryland in 1979 under the guidance of Professor Azriel Rosenfeld. The title of his thesis was "Ambiguity Reduction in Probabilistic Networks." While the topic of the thesis was "Probabilistic Relaxation", Shmuel still tries to follow the advice in Jack Minker's letter (the CS Chairman in 1979) which reminded him that the period after graduation "is not a time for relaxation"...

After graduating from Maryland, Shmuel returned to Israel and spent one Year at Ben Gurion University. In 1981 he became a faculty member at the Hebrew University of Jerusalem where he is still a Professor of Computer Science. Shmuel served as chairman of the Institute of Computer Science at Hebrew University from 1990 to 1993. He spent a sabbatical year at Maryland, and two sabbatical years at the Sarnoff Corporation in Princeton.

Professor Peleg is best known for his work on creating panoramic mosaics from sets of images, and more recently, from sets of videos. With the limited field of view of human vision, human perception of most scenes is built over time while our eyes are scanning the scene. In the case of static scenes this process can be modeled by panoramic mosaicing: stitching together images into a panoramic view. Prof. Peleg has shown how, remarkably a dynamic scene, scanned by a video camera, can be represented with a dynamic panoramic video even though different parts of the mosaic were imaged at different times. His research shows how to generate dynamic mosaics by sweeping the aligned space-time volume of the input video by a "time front" surface and generating a sequence of time slices in the process. A demonstration of this process can be found at his web site.

Shmuel lives in Jerusalem, Israel with his wife, Gaby.