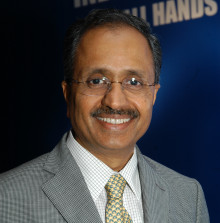 Dr. P (Gopal) Gopalakrishnan received his Ph.D. degree in Computer Science from the University of Maryland in December 1986. He joined IBM at the Thomas J. Watson Research Lab in Yorktown Heights, NY in 1986 and was part of the world-leading speech recognition effort at that lab for many years. During this time he did seminal work in the area of search algorithms for speech recognition and acoustic modeling for continuous speech recognition. Along the way he also developed with his colleagues IBM's first real-time continuous speech recognition system which was a precursor to the development of IBM's large vocabulary continuous dictation product. He then moved on to focus on conversational interfaces and its use in mobile computing. He led the team that developed IBM's embedded speech recognition systems which is currently deployed in several production cars from leading manufacturers. He is the co-author of several significant papers in this field.

Dr. Gopalakrishnan then moved on to lead IBM's research strategy in Pervasive computing and managing the Pervasive Infrastructures department at the IBM Thomas J. Watson Research Center. In this role he managed the development of advanced technologies in infrastructure middleware, device components, and prototype solutions for pervasive computing and set the directions of researchers across the worldwide labs of IBM in this area of research.

Dr. Gopalakrishnan is currently the Vice President, India Software Lab (ISL). In this capacity he oversees product development and technology innovation efforts of a team of over three thousand engineers spread across five cities in India. The ISL is one of the largest such development centers for IBM, with projects ranging from semiconductor research and development to AIX, through all major software brands of IBM.

Dr. Gopalakrishnan has received numerous awards from IBM during his tenure, including an Outstanding Innovation Award and several Invention Achievement awards. He has over twenty patents to his credit and has published extensively in conferences and journals. An inhabitant of the flat world, Dr. Gopalakrishnan maintains homes in and commutes regularly between New York and Bangalore.