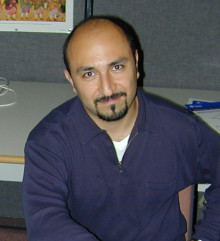 S. Cenk Sahinalp received his Ph.D. from University of Maryland in early 1997 under the supervision of Prof. Uzi Vishkin. His thesis was on theoretical development and analysis of string algorithms. Cenk spent 1997 in Bell Labs, Murray Hill as a postdoctoral fellow, where he worked on data structures and data compression algorithms. For the next two years he was a faculty member at the Department of Computer Science, University of Warwick, UK, during which he frequently visited UPenn.'s Center for Computational Biology, perhaps the first lab dedicated to this new discipline, as well as DIMACS and AT&T Research. Much of his work from that time was on developing the first algorithms for embedding string spaces to vector spaces and approximation algorithms for edit distances under block operations. In 1999 he became a faculty member at Case Western Reserve where his research attention moved to applications of algorithms to genomics. There he co-founded the Center for Computational Genomics, one of the first Centers of its kind. In 2003 Cenk became an associate professor at Simon Fraser University in Canada; he became a full professor in 2007. At SFU he directs the Lab for Computational Biology and co-directs the Bioinformatics for Combating Infectious Diseases Program. He also has visiting appointments at the Vancouver Prostate Centre and the Department of Genome Sciences, University of Washington.

Cenk has published over 100 papers on the analysis of the complex nature of genome sequences, as well as RNA interactions and network biology. He is especially known for his algorithms and software tools for analyzing data generated by "next generation sequencing" technologies. He has been a participant in the 1000 Genomes Project (one of the scientific breakthroughs of the year 2010 according to the Science magazine), for which his team developed the first algorithms and computational tools for identifying structural variants in the repeat regions of the human genome (see VariationHunter). His lab also developed the first algorithms and tools for identifying novel insertion sequences,NovelSeq and copy number variants through exhaustive genome mapping mrFAST and mrsFAST. Recently he is working on analyzing RNA-Seq (transcriptome) data for identifying and quantifying expressed gene fusions (DeFuseand Comrad) and other transcriptomic aberrations (Dissect). As a part of the International Cancer Genomes Consortium (http://www.icgc.org) he is particularly interested in applications of these methods in cancer genomics. Cenk's CommonLAW framework for simultaneously analyzing highly related genomes significantly increases the accuracy in detecting structural differences among tissue samples from the same individual (e.g. tumor vs normal) and is now used extensively to identify clinically relevant mutations in children with specific conditions (e.g. autism) who have normal parents. CommonLAW has been featured on the cover of Genome Research, declared as a research highlight by Nature Biotechnology and covered extensively as a research breakthrough by the Genome Technology magazine.

Cenk has (co)-advised 4 postdoctoral fellows, 9 Ph.D. thesis and numerous M.S. thesis students. Four of his Ph.D. students have received NSERC Alexander Graham Bell Scholarships (equivalent to NSF graduate fellowships), one has received the NSERC Postdoctoral Fellowship and another has received the Governor General's Gold Medal at SFU for the best Ph.D. thesis in all disciplines. Many of Cenk's students and postdocs hold faculty positions and research appointments in some of the leading institutions in the world.

Cenk was the general chair of RECOMB 2011, PC chair of CPM 2004 and APBC 2013, sequence analysis area co-chair of ISMB in 2010,2011 and 2012, and assumed similar leadership roles in several other meetings. He has also founded RECOMB Seq, the annual RECOMB Satellite Meeting on Sequencing. He is an area co-editor for BMC Bioinformatics and serves on the editorial boards of Bioinformatics and several other journals. He has received an NSF Career Award, a Michael Smith Foundation for Health Research Scholarship (as the only computer scientist to date) and an NSERC Discovery Accelerator Award.

Cenk was named a University of Maryland Computer Science Department Distinguished Alumnus in 2012.