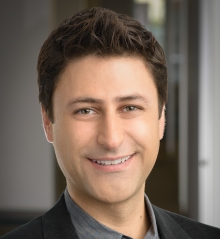 Previously, Shayan co-founded Zoosk, one of the world's largest online dating platforms and a top 10 grossing app in the Apple App Store. Shayan led Zoosk as CEO for 7 years, raising over $60M in venture capital and growing the company to over $200M in annual revenue. Prior to founding Zoosk, Shayan was a program manager and software engineer for Microsoft.

Shayan received a MS in Computer Science from the department and an MBA from University of Washington. While completing his undergraduate degree in computer science at Sharif University of Technology in Tehran, Shayan met co-founder Alex Mehr. Shayan and Alex initially intended to pursue careers in academia, but ultimately decided to become entrepreneurs while they were roommates at the University of Maryland.

In addition, Shayan is an angel investor and advisor to startup companies including Loup, PaperKarma (acquired by reputation.com), Identified (acquired by Workday) and AppComputing.