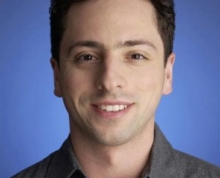 Sergey Brin, Co-founder and President of Technology at Google, Inc., received a Bachelor of Science Degree with honors in mathematics and computer science from the University of Maryland at College Park in 1993. He is currently on leave from the Ph.D. program in computer science at Stanford University where he received his Master of Science Degree in 1995. Though still enrolled in the Stanford doctoral program, Sergey has suspended his Ph.D. studies while he is working at Google. Sergey is a recipient of a National Science Foundation Fellowship. It was at Stanford where he met Larry Page and worked on the project that became Google, the company they co-founded in 1998. The pair authored what is widely considered their seminal contribution, a paper entitled "The Anatomy of a Large-Scale Hypertextual Web Search Engine". The paper has since gone on to become the tenth most accessed scientific paper at Stanford University. Google has grown from a two person operation to one of the largest corporations in the world. The Google search engine, developed by Brin and Page has won numerous awards .

Sergey's research interests include search engines, information extraction from unstructured sources, and data mining of large text collections and scientific data. He has published more than a dozen academic papers.

He has been a featured speaker at several international academic, business and technology forums, including the World Economic Forum and the Technology, Entertainment and Design Conference. He has shared his views on the technology industry and the future of search on the Charlie Rose Show, CNBC, and CNNfn. In 2004, he and Larry Page were named "Persons of the Week" by ABC World News Tonight. In January 2005 Sergey Brin was nominated to be one of the World Economic Forum's "Young Global Leaders".

Sergey has various hobbies outside of his working duties. He is an avid gymnast and has taken trapeze lessons. Like many other Google executives, Sergey often commutes about work on roller skates and plays roller hockey during breaks.