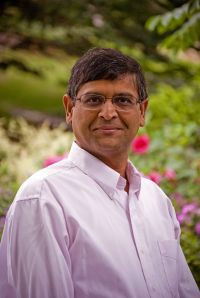 Vipin Kumar received his Ph.D. degree in Computer Science from the University of Maryland in 1982 under the guidance of Professor Laveen Kanal. After leaving Maryland, Vipin taught at the University of Texas at Austin before joining the University of Minnesota in 1989, where he is currently William Norris Professor and Head of the Computer Science and Engineering Department. During 1998-2005, he also served as the Director of the Army High-Performance Computing Research Center, which is a multi-university consortium funded by the US Army for HPC research.

Vipin is internationally recognized for his research in the areas of parallel computing, graph partitioning, and data mining. He and his students developed highly scalable parallel formulations of combinatorial algorithms (e.g., problem solving search algorthms used in Artificial Intelligence), numerical and graph algorithms that underly scientific and engineering simulations, and data mining algorithms for association pattern discovery and predictive modeling. One of Vipin's significant contributions is the isoefficiency metric for analyzing the scalability of parallel algorithms. This metric represented a major breakthrough in understanding scalability, and is now routinely covered in major textbooks on parallel computing.

Metis/ParMetis/hMetis (Serial and parallel graph-partitioning libraries developed by Vipin's group) are extensively used world-wide at academic institutions, national research labs, and various industries for partitioning irregular meshes that arise in scientific and engineering simulations, re-ordering sparse matrices for factorization, finding dense portions in large unstructured graphs for data mining, and for min-cut partitioning of VLSI circuits. Spatio-temporal data mining techniques developed by Vipin's group have been used to discover patterns in global climate by NASA scientists. These results have been published in a number of scientific articles (co-authored by Kumar and NASA scientists) and many of them have been highlighted in Press Releases from NASA Ames. February 2005 issue of "Mechanical Engineering", the magazine of the American Society of Mechanical Engineers (equivalent of CACM and IEEE Computer) had a cover story on data mining that extensively covered Vipin's research on data mining and its applications in science and engineering.

Vipin has co-authored graduate level text books (Introduction to Parallel Computing and Introduction to Data Mining) that are used world-wide and have been translated in several languages. Vipin has also co-edited 6 books and published over 200 refereed research articles in journals and conferences. Many of his papers are amongst the most cited papers in computer science - Google Scholar shows more than 4,000 citations for just 10 of his papers and books. He has advised 18 PhDs, two of whom were among five finalists in the highly competitive ACM Doctoral Dissertation Award Competition - Gupta (1995) and Lin (1988), and many are now faculty at major research universities: Grama (Purdue University), Karypis( University of Minnesota), Tan (Michigan State), and Xiong (Rutgers University Business School).

Vipin is regularly invited to give keynote and plenary lectures at major international conferences, and has served as a General Chair, Program Chair, Co-Chair, or Vice-Chair for over a dozen major international conferences sponso red by ACM, IEEE, and SIAM. He serves as the Chair of the steering committee of the SIAM International Conference on Data Mining) and is on the steering committee of the IEEE International Conference on Data Mining. He is a founding Co-Editor-in-Chief of "Journal of Statistical Analysis and Data Mining" and Editor-in-Chief of the IEEE Computational Intelligence Bulletin.

Vipin is a Fellow of the ACM and a Fellow of IEEE. He received the 2005 Technical Achievement Award from the IEEE Computer Society for his contributions to the design and analysis of parallel algorithms, graph-partitioning, and data mining.